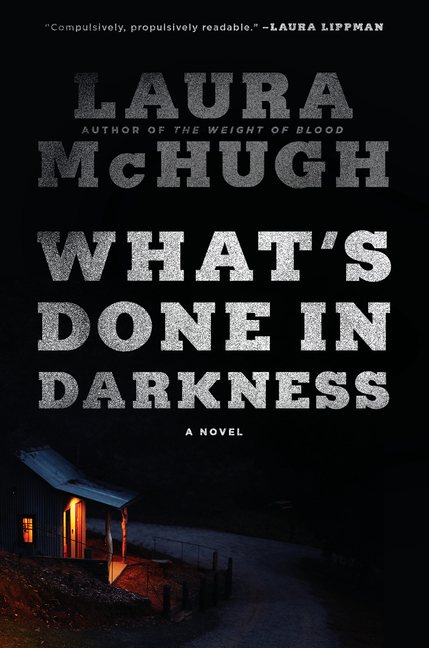 The author of The Weight of Blood returns with a thriller set in the Ozarks, where Sarabeth's fundamentalist Christian family demands that she marry as soon as she turns 18. When she is abducted, tortured and found on a roadside, her family and police think she was lying, just trying to escape the marriage. Years later, as an independent adult with no ties to her family, she gets a call from Detective Nick Farrow that calls her back home to investigate a case much like her own.

What The Reviewers Say
Rave Lorraine Berry,
Los Angeles Times
Unlike those reporters who parachute in to write about the 'backward' nature of such folks, McHugh offers affectionate, respectful views of people a lot more complex than overfamiliar stereotypes. She never patronizes her characters, even as her novels itemize the costs exacted by capitalism on a complacent workforce. What really sets McHugh apart, though, is that her social novels are seasoned with gothic horror. Each of them has kept me reading late into the night and left me chilled by their revelations. The mountains and hollows of Arkansas are gorgeous, but there be monsters in those hills. McHugh is tremendously skilled at conveying dire poverty while acknowledging the fears such privation provokes in others ... McHugh has a gift for showing how those who struggle find other ways of asserting their self-worth, whether in cleaving to religious belief, constructing social hierarchies based on race and gender or simply plotting their escapes.
Read Full Review >>
Rave Ray Palen,
Bookreporter
Laura McHugh has a knack for taking family situations and elevating them to the level of literary thrillers that will keep you hooked straight through to the end of the story ... Laura McHugh has an impressive talent for writing utterly readable stories that you just can’t put down, and What's Done in Darkness is no exception. The final third of the novel is a true rollercoaster ride that purports not to end safely. Sarah is a complex protagonist with whom readers can sympathize, even though some of her actions will yield many unsettling moments during this tense thriller.
Read Full Review >>
Rave Jane Murphy,
Bookreporter
McHugh delivers a harrowing rural thriller with a Southern gothic feel to it, set deep in the heart of the Ozarks ... This is a redemptive and absorbing tale of one victim’s courage in confronting her suffocating past. Discerning readers will recognize the truth before Sarabeth does, but it doesn’t matter. There are surprising final twists to come.
Read Full Review >>
See All Reviews >>
SIMILAR BOOKS
Fiction

The Quiet Boy
Ben H. Winters
Positive
What did you think of What's Done in Darkness?
© LitHub | Privacy