What the Ermine Saw: The Extraordinary Journey of Leonardo Da Vinci's Most Mysterious Portrait 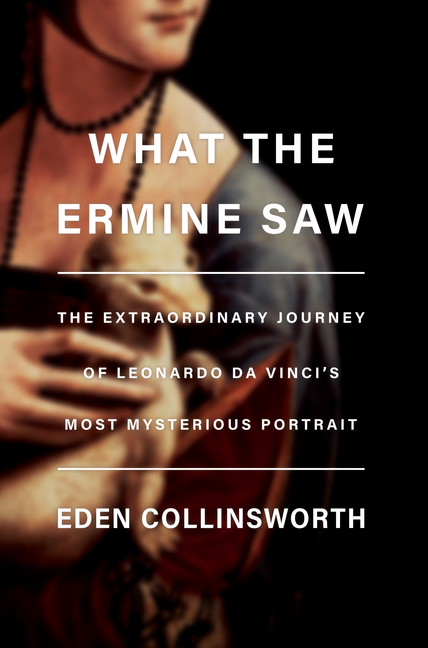 The true story behind one of history’s most enigmatic portraits.

What The Reviewers Say
Positive Kelly Karst,
Library Journal
Inquisitive and with an eye for social commentary, Collinsworth moves at a dizzying pace: What century is it? Did the war end already? Several existing books also speak to elements about Lady with an Ermine, and the hands it has gone through over time, but they can be quite dry or only give part of the story. Collinsworth brings it all together and makes the story accessible and juicy, reveling in the more sordid details of courtly life and general scandal. Although some readers will recognize Leonardo’s famous portrait of Cecilia Gallerani, young mistress of the Duke of Milan, and her sleek pet, many others will be surprised at how it came to be and all the drama surrounding its survival ... Art lovers and history buffs will enjoy this fast-paced, entertaining romp from the Renaissance to the present day, focusing on one painting by one of the world’s most famous, intriguing, and mysterious artists.
Read Full Review >>
Mixed Cammy Brothers,
The Wall Street Journal
Ms. Collinsworth’s story takes on the character of a national drama as the portrait becomes part of the messy diplomacy between Poland and Russia ... Among the felicities of Ms. Collinsworth’s book is its cast of appealing and sympathetic women who carved their own identities and public profiles to attain their aims ... In the chapters on the period when the painting disappeared, Ms. Collinsworth focuses on the amorous affairs of her protagonists. Readers may find the details here amusing or irrelevant—or feel impatient for the return of the painting itself. As lively a narrator as the author is, it sometimes feels as if she might be better suited to historical fiction, with her tendency for saucy details that can strain credulity ... the risk of anachronism seems high ... The closer the narrative comes to the present, the less the author embellishes. Perhaps as a result, the final phase of the book, which recounts the Nazi fascination with Lady, is the most compelling ... Readers hoping to find here a revealing account of Leonardo’s mastery as a portrait painter, his artistic technique, or his impact on his contemporaries and later generations will be disappointed. Instead Ms. Collinsworth tells the story of an exceptionally beautiful painting across time. The result is an often engaging, occasionally convoluted, at times gripping tale of princes, dukes and enterprising women, all leading up to the unlikely outcome that the painting should currently reside in Krakow ... Ms. Collinsworth proves herself a skilled portraitist in her own right. But while her book reveals the story of how the painting has been miraculously preserved over the centuries, What the Ermine Saw leaves unanswered the question of why it has mattered so much to so many for so long.
Read Full Review >>
Positive Erin Maglaque,
The New York Times Book Review
With sometimes dizzying effect, Collinsworth vaults between granular detail and grand context. What the Ermine Saw bolts through wars and empires, art-making and state-making across the continent in the last 500 years ... The scale and subsequent restitution of the Nazi art thefts make for an enthralling story, and Collinsworth widens her focus to tell absorbing tales of heroic curators and art historians who painstakingly reassembled Europe’s cultural patrimony after the war.
Read Full Review >>
See All Reviews >>
What did you think of What the Ermine Saw: The Extraordinary Journey of Leonardo Da Vinci's Most Mysterious Portrait?
© LitHub | Privacy