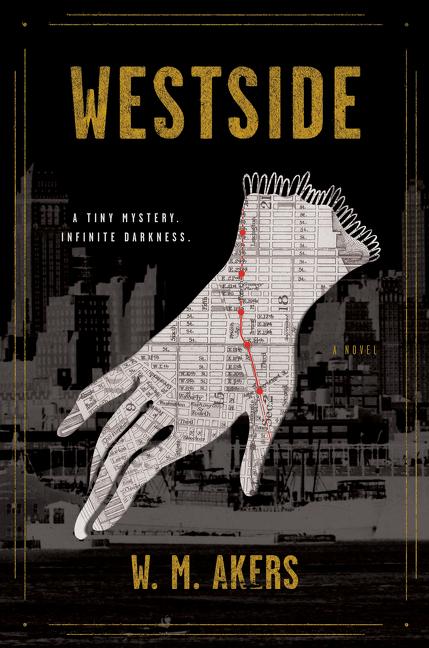 It’s 1921, and a thirteen-mile fence running the length of Broadway splits the island of Manhattan, separating the prosperous Eastside from the Westside—an overgrown wasteland whose hostility to modern technology gives it the flavor of old New York. On the Westside, Gilda, a detective specializing in "tiny mysteries" is drawn into a case surrounding a single, missing glove. The case draws Gilda into a murky underworld, and before long she must confront a mire of bootlegging, smuggling, corruption—and an evil too dark to face.

What The Reviewers Say
Rave Lyndsay Faye,
The New York Times
...[a] superb debut...a novel steeped in existentialism while delivering gun molls, drunken wastrels and purebred thugs. ... Akers’s choice to spotlight a sleuth preoccupied by 'those impossible puzzles that burrow into our brains like splinters' is viscerally effective. In this world, a missing coffeepot can mean more than a murder, and the unbearably pure joy of baseball statistics can sustain a lost soul. An alcoholic father could ruin someone’s life, yes — but so could having the fragment of a tune stuck in one’s head for decades ... A world that could be completely unwieldy is rendered tangible in the sounds of street music, glimpses of skittering shadows and whiffs of violent smells. One cannot effectively borrow from the horror genre as freely as Akers does without concrete imagery to sustain the imagination. His prose is sharply crystalline, especially when describing minute, bittersweet and even ugly moments ... Westside suffers from overabundance, but such is only natural for a novel in which a lush entropic force has swallowed the West Village.
Read Full Review >>
Rave Anjanette Delgado,
New York Journal of Books
...a fantasy novel that is both literary and convention bending, reading as horror, crime fiction, dark noir, pulp slasher novel, action, and adventure gaming script, hidden-door-anthropological-history, delayed coming-of-age novel ...gumshoe mystery, a love letter to pre-Prohibition New York City, and—would you believe?—a disquieting dystopian fable reminiscent of Lewis Carrol’s Alice in Wonderland. ... [Westside is all of those things simultaneously, using only one narrator and one point of view to tell a complex story, and yes, (for the most part) it works, thanks in no small part to Akers’ talent for staying in tense control of his story while delivering heady, over-the-top prose and quick-paced Raymond Chandler-like dialogue... Beverly Cleary once said great fiction should be, above all things, a pleasure to read, and Westside is certainly that, and then some.
Read Full Review >>
Rave Sean Kinch,
Chapter 16
Westside proceeds at an unrelenting pace. Each time Gilda escapes one trap, she runs immediately into something worse. Akers finds time, though, to inject the prose with vivid descriptions ... With its cast of colorful villains and its brilliantly realized metropolitan landscape, Westside is likely the first of a series, giving readers more chances to visit Akers’s creepy yet recognizable world.﻿
Read Full Review >>
See All Reviews >>
What did you think of Westside?
© LitHub | Privacy