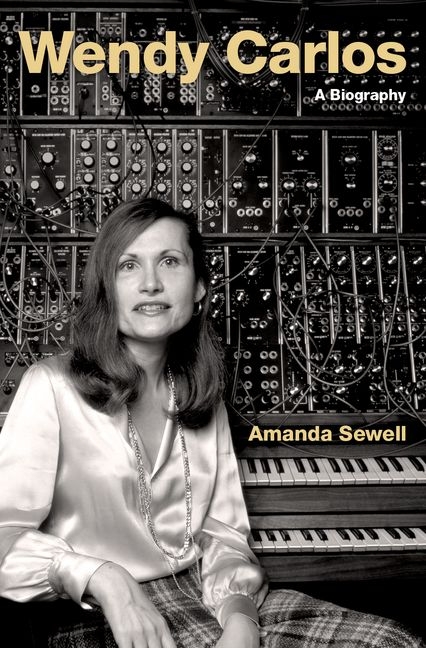 With her debut album Switched-On Bach, composer and electronic musician Wendy Carlos (b. 1939) brought the sound of the Moog synthesizer to a generation of listeners. Her story is not only one of a person who blazed new trails in electronic music for decades but also the story of a person who intersected in many ways with American popular culture, medicine, and social trends during the second half of the 20th century and well into the 21st.

What The Reviewers Say
Positive Geeta Dayal,
4Columns
... the first serious book to examine Carlos’s legacy at length, both as a composer and as a transgender woman. It’s an essential read—not only for electronic music fans, but for anyone interested in the history of gender and popular culture ... The book progresses with Sewell as the sole narrator, which can get monochromatic at times, reading like a detailed, fact-filled report rather than a fun and colorful history ... That said, Wendy Carlos: A Biography is a great work of scholarship ... deals sensitively with her gender transition, deftly chronicling her ascent to fame in the 1960s and the intense media scrutiny about her gender identity ... Those who can stick with it—from the long technical explanations of synthesizers to expansive, involved discussions of Carlos’s press interviews —will be amply rewarded...also gets bogged down later on, when it becomes less about music and more about lawsuits, business issues, and other concerns ... thoughtful and exhaustive.
Read Full Review >>
Positive Chris Ingalls,
PopMatters
... noteworthy in that it manages to be primarily about Carlos the composer, the musician, the vanguard of electronic music. While her gender identity is certainly written about in great length, it's never approached as a morbid curiosity. If anything, it's used primarily to chronicle the challenges Carlos encountered around society's preconceptions and prejudices toward transgendered people ... Sewell writes exhaustively and in great detail of the work Carlos continued to produce ... Carlos's insistence on essentially making her music nearly impossible to hear in the 21st century poses an obviously frustrating problem for readers of this fascinating biography. The music is so well-documented and lovingly described, that readers who have not previously purchased her music in the now-deleted physical formats are not able to call up the albums on streaming devices can be maddening. That virtually no new interviews have been conducted in the writing of the book is actually less of a problem. Sewell's research is impeccable, and although the lack of fresh quotes can occasionally result in a few dry stretches, this is often essentially an entertaining, often revelatory work, truly befitting a legend and a trailblazer.
Read Full Review >>
Positive Bill Baars,
Library Journal
Even with limited secondary sources to rely on, Sewell has written a long-overdue scholarly work that sheds light on Carlos’s creative process while never sensationalizing her private life ... Sewell’s nuanced biography of an overlooked composer is our best look yet at this groundbreaking artist, and a reminder that art can and should speak for itself.
Read Full Review >>
See All Reviews >>
What did you think of Wendy Carlos: A Biography?
© LitHub | Privacy