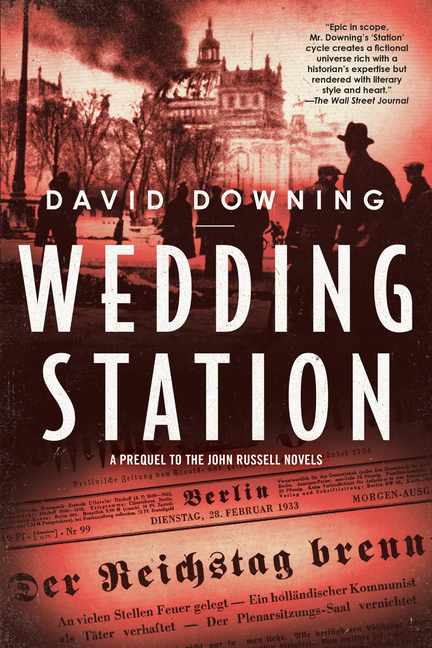 A prequel to the John Russell novels.

What The Reviewers Say
Positive Tom Nolan,
The Wall Street Journal
...a tensely satisfying prequel to the main series ... Wedding Station takes the form of a journalistic procedural, as Russell follows whatever leads present themselves, in search of truths that may or may not ever see print ... Mr. Downing excels at dramatizing the anxiety and dread pervading a society whose civil liberties are being daily eroded. And his protagonist, mixed motives and all, displays the personal integrity of a man unwilling to save himself from evil beasts by becoming one.
Read Full Review >>
Positive Beth Kanell,
New York Journal of Books
David Downing’s novels of crime, suspense, and espionage have danced through both world wars. His Station series, six titles before Wedding Station , evoke the relentless terror of life in Berlin during World War II. Now, in a fierce and daring prequel, Downing reveals the back story to the propulsive series ... Wedding Station (the title refers to a location in Berlin, Wedding, pronounced with a V sound at the start) is an ideal choice for both Downing fans and newcomers to his fast-paced and intense crime novels. As a 'prequel,' it won’t require catch-up time, except perhaps for the alphabet soup of the various German groups menacing Berlin. And as part of the series, it’s a marvelous exploration of how John Russell steps out of ordinary life into endless dangerous choices, and into how the Nazi regime will convince itself of a mission to subdue all of Europe.
Read Full Review >>
Positive Kirkus
As Nazism tightens its grip on Germany, an English crime reporter tackles a handful of juicy stories ... Downing's inclusion of episodes from the rise of Nazism and backstories involving Russell and his expatriate friends adds texture but slows the propulsive pace of the story ... A litany of sordid crimes that are both a MacGuffin for and a window into a chilling, compelling era.
Read Full Review >>
See All Reviews >>
SIMILAR BOOKS
Fiction

The Lamplighters
Emma Stonex
Rave
What did you think of Wedding Station?
© LitHub | Privacy