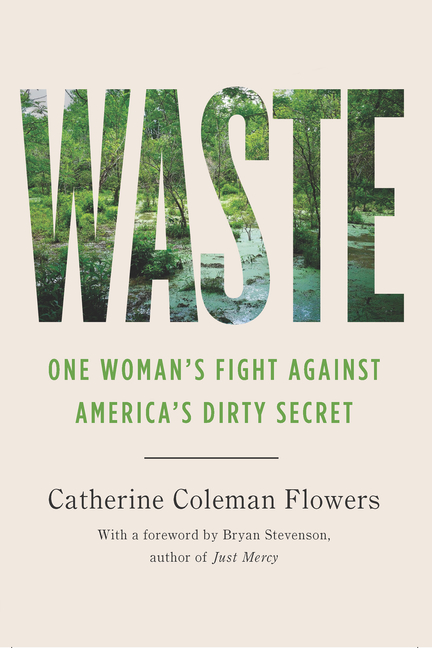 The MacArthur grant–winning 'Erin Brockovich of Sewage' tells the riveting story of the environmental justice movement that is firing up rural America, with a foreword by the author of Just Mercy.

What The Reviewers Say
Rave Anna Clark,
The New York Times Book Review
Pamela Rush didn’t get the home she deserved. She tried ... Catherine Coleman Flowers, an environmental activist who was recently awarded a MacArthur 'genius' grant, tells Rush’s story in Waste: One Woman’s Fight Against America’s Dirty Secret. The book spotlights an unpleasant and complicated problem — the lack of proper waste sanitation in rural America — and the phenomenal toll it takes on public health and dignity ... Flowers brings an invigorating sense of purpose to the page. Waste is written with warmth, grace and clarity. Its straightforward faith in the possibility of building a better world, from the ground up, is contagious.
Read Full Review >>
Positive Philip Zozzaro,
Booklist
With the people of Lowndes Country forced to live in squalor, and burdened by an unaffordable fix, Flowers exposes the true injustice of the situation and how it can be remedied, from both sides of the political spectrum. This is a powerful and moving book that deserves wide readership.
Read Full Review >>
Positive Thomas J. Davis,
Library Journal
Mixing memoir, civil rights history, and polemic, this blunt litany by Flowers delivers a call to action for all concerned about sustainable solutions to the shamefully inadequate environmental infrastructure, policies, and practices in the United States.
Read Full Review >>
See All Reviews >>
What did you think of Waste: One Woman's Fight Against America's Dirty Secret?
© LitHub | Privacy