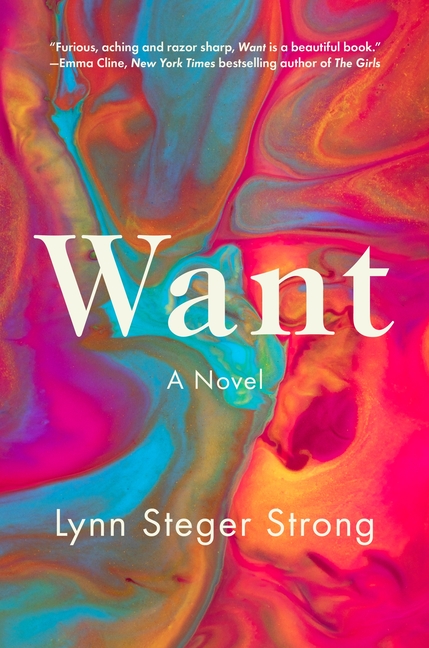 Elizabeth is tired. Years after coming to New York to try to build a life, she has found herself with two kids, a husband, two jobs, a Ph.D.—and now they're filing for bankruptcy. When she reaches out to Sasha, her long-lost childhood friend, her timing is uncanny. Sasha is facing a crisis, too, and perhaps after years apart they can rejoin one another's lives.

What The Reviewers Say
Rave Hillary Kelly,
Vulture
... a defining novel of our age of left-behind families ... By the time of its publication this July, four months into unemployment numbers so obscene that they’ll be meaningless, Want doesn’t feel so far off from the lives many Americans have been living every day ... an ideal sample of how to produce fiction that is timely and timeless ... It’s appeal right now may have something to do with the ways it thoughtfully plays with autofiction, darting in with details from Strong’s real life, then knowingly inflating and reshaping plot points, a wise reimagining of what we can do with our own stories ... But it’s also due to the prose — liquid, tender, fluttering — which keeps this story easy, perhaps too easy, to read. It’s an odd pleasure — a difficult story that is winningly told. You’ll feel guilty for enjoying it as much as you do.
Read Full Review >>
Positive Helen Schulman,
The New York Times Book Review
I empathized with Elizabeth, the confessional narrator of Want, Lynn Steger Strong’s moving second novel ... As a narrator, Elizabeth is smart and funny and literary to the marrow. The books she inhales for sustenance have turned out to be a great addition to my own pandemic pile. (Thank you, Ms. Strong.) But her tale of woe is in many ways painfully familiar, and Want often reads like the plotless treadmill diary of a 30-something artist-class white Brooklynite who was born into what she unrealistically thought was a safer, more forgiving world. As I read on, engaged, sympathetic and often frustrated, I found myself in that strange space of feeling deeply for her predicament, yet wanting to shake sense into her: Keep your two lousy jobs and send your husband back to work! But what looks at first glance like a couple too entitled and spoiled to face the music ultimately lays bare what happens to people so vulnerable and idealistic that they are seemingly unable to climb out of the hole they’ve dug together. Viewed from that angle, the book proved more interesting, and it turns out some of the heroine’s fecklessness is related to long-ago psychological torment that brought both Elizabeth and Sasha to their knees ... While it doesn’t fix the world or even pay the rent, in companionship there is grace.
Read Full Review >>
Positive Maggie Doherty,
The Nation
Strong, meanwhile, is great on the small details of the literature classroom ... plot—the literary structure that signals progress—gives way to an atmosphere of anxious uncertainty, one familiar to many of us who came of age during a moment of financial and ecological crisis ... in Want, financial precarity is the central subject, shaping the characters, the events, the prose. The novel describes downward mobility: a rare plotline in American literature, though not in American lives ... The narrator’s uneasy and shifting social position allows Strong to sketch a broader portrait of life than we find in many New York novels about youngish literary types ... Strong interweaves wonderful depictions of parenting: two children learning to share a stuffed octopus, a child’s joy at seeing her mother wearing a purple dress ... Her prose is spare, as if performing the deprivation the book’s title suggests. Her tone is lyrical, even elegiac at times; there’s less irony than we might expect from a narrator with a PhD ... paradoxical feeling characterizes much of the novel. The narrator is both desperate and grateful, cursed and lucky, envious and content ... Want...beautifully sketch[es] those feelings, which more and more of us are coming to know. There’s the anxiety of wanting or having children without a future on offer, for you or for them. There’s the envy of those who have lucked out or gamed the system or inherited wealth.
Read Full Review >>
See All Reviews >>
SIMILAR BOOKS
Fiction

The Escapement
Lavie Tidhar
Rave
What did you think of Want?
© LitHub | Privacy