Walking the Bowl: A True Story of Murder and Survival Among the Street Children of Lusaka 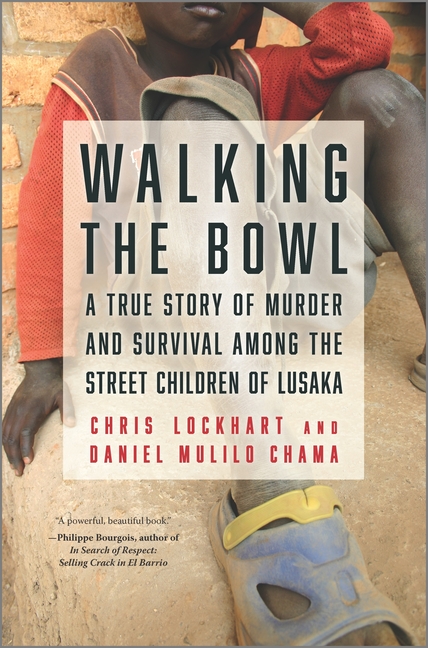 A real-life story of four street children in contemporary Zambia whose lives are drawn together and forever altered by the mysterious murder of a fellow street child.

What The Reviewers Say
Rave Ellen Barry,
The New York Times Book Review
... vibrant ... Street children learn the rules of the undercity, because they have to. They are survival machines. In Walking the Bowl, Chris Lockhart, an American anthropologist, and Daniel Mulilo Chama, a Zambian outreach worker, allow us to slip inside this world as effortlessly as one might slip into a swimming pool ... There have been other novelistic nonfiction narratives about the daily lives of the urban poor...But daily life, meticulously recorded, rarely has the attributes of a novel — a clean arc of ascending action, a handful of vivid characters, an ending that snaps shut like a purse ... Walking the Bowl, remarkably, has all of those ... There is a built-in problem to nonfiction that reads like fiction. At times, the language of Walking the Bowl is so literary that I found myself wondering how much of it came from precise observation. It narrates the unspoken thoughts of its subjects in poetic, abstract terms ... In explanatory notes, Lockhart and Chama say that 85 percent of the incidents described in the book were 'directly observed by a team member,' and that around 75 percent of quotations were captured with an audio recorder. The remainder was reconstructed through interviews. Still, I had an unsettling sense, at times, that I was hearing a writer’s imagination at work ... Its pages vibrate with life.
Read Full Review >>
Rave Barbara Bamberger Scott,
Bookreporter
... an unforgettable tale of poverty, violence, cruelty and hope ... should be read and studied by anyone genuinely dedicated to real reform and wishing to be educated about the actual conditions of the world’s abandoned and often forgotten children.
Read Full Review >>
Rave Publishers Weekly
... transcendent ... As the children’s backstories and links to the murdered boy emerge, Lockhart and Chama expose the 'overwhelming structures and forms of violence' impacting their daily lives, as well as the 'small acts of kindness' that gave them hope. Fans of Behind the Beautiful Forevers and Strength in What Remains will flock to this riveting and deeply reported portrait of life on the margins.
Read Full Review >>
See All Reviews >>
What did you think of Walking the Bowl: A True Story of Murder and Survival Among the Street Children of Lusaka?
© LitHub | Privacy