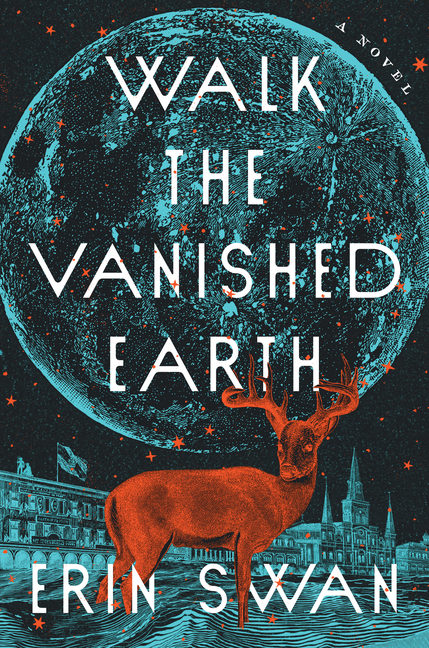 The year is 1873, and a buffalo hunter named Samson travels the Kansas plains. The year is 1975, and an adolescent girl named Bea walks those very same plains. The year is 2024 and, after a series of devastating storms, an engineer named Paul has left behind his suburban existence to build a floating city above the drowned streets that were once New Orleans. The year is 2073, and Moon has heard only stories of the blue planet-Earth, as they once called it, now succumbed entirely to water.

What The Reviewers Say
Rave Dexter Palmer,
New York Times Book Review
an epic in the vein of David Mitchell’s Cloud Atlas or Namwali Serpell’s The Old Drift, whose frameworks allow their authors to flex their skills with both historical and speculative fiction ... A weird, ambitious novel ... Swan’s staccato sentences can be evocative ... Swan’s prose wonderfully portrays things they cannot comprehend but whose meanings are nonetheless plain to the reader. This rich, endlessly engaging novel is, one hopes, the first in a long career for an author who has the talent and imagination to write whatever she wants.
Read Full Review >>
Positive Alexis Ong,
Tor.com
Compelling, sometimes perplexing ... Walk the Vanished Earth is a book that I read easily, steadily, from beginning to end. Swan is particularly good at small, unassuming turns of phrase that employ the familiar fixed cadence and sense of economy that characterizes most of American creative nonfiction ... A contemporary exploration of cultural historiography that is usually downplayed in mainstream science fiction that prioritizes people and survival. It shines best when Swan is on the edge of introducing us to something new ... The result is at times an uneven read, mostly in the earlier chapters, that are eventually eclipsed by Swan’s crisp prose, bold scope, and earnest vision for an uncertain new world.
Read Full Review >>
Positive Grace Kennedy,
Ploughshares
Even through the lens of one family line, Swan’s novel is an ambitious undertaking—the end of our world and the creation of a new one—and it felt, at times, like Swan had to rush to fit it in under four hundred pages. The frequent time jumps were often jarring: as soon as I found my bearings in one chapter, we were jolted into the next, with new people to care about and new rules to follow ... And yet, Swan creates characters so fully lived in, with such detail and heart, that I would have read more if given the chance. As it is, I read the entire book in three days, gripped by the story.
Read Full Review >>
See All Reviews >>
SIMILAR BOOKS
Fiction

The Women Could Fly
Megan Giddings
Rave
What did you think of Walk the Vanished Earth?
© LitHub | Privacy