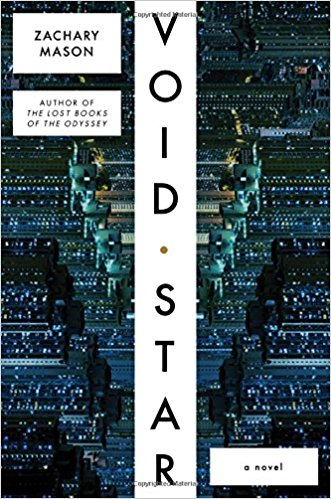 What The Reviewers Say
Rave Michael Berry,
The San Francisco Chronicle
[Void Star] reads like something William Gibson might have concocted in the ’90s, a far-ranging, globe-trotting tale of memory, mortality and artificial intelligence ... With Void Star, Mason proves that he is also adept at building a credible near-future, choreographing three-part edge-of-your-seat plotting and emulating the mirror-shades-at-midnight cool of onetime cyberpunks such as Gibson ... Void Star treats the best aspects of cyberpunk with respect and imagination and adds its own fresh speculations about AIs and other digital marvels. Mason is clearly a versatile talent, and his second novel may be a harbinger of even more ambitious work to come.
Read Full Review >>
Positive Jonathan McAloon,
The Financial Times
...there is at times a hallucinatory quality to the book, which shifts cleverly between dreams, simul­ations and digital hinterlands between life and death. But as well as being a philosophical work of speculative fiction, Void Star is also a sprawling multi-viewpoint thriller, in which individuals flee capture or death, battle rogue computers and corrupt humans, and traverse continents to seek answers ... Yet despite these literary innovations, Void Star begins to lose its way when Mason concentrates his energies on pursuing a more conventional SF action plot, in turn threatening to drown out those quiet stories that his remarkable machines are telling themselves.
Read Full Review >>
Mixed Steven Poole,
The Guardian
...an enjoyably driving techno-thriller with literary ambition, and as such it may be read as being in close dialogue with the work of SF demigod William Gibson, admirers of whom may see in this novel a lot of influence, even outright homage ... Void Star’s particular tricksiness lies in its not revealing when some apparently physical location might be a virtual hallucination — and even when some apparently real characters are just memory reconstructions running on computers, unbeknown to themselves or the reader. This is clever, but sometimes feels cheap: a character will die dramatically, only for it to turn out that it was just a copy ... But Void Star’s larger drawback is that, as its storylines converge in virtual spaces, everything begins to seem ethereally confusing and abstract.
Read Full Review >>
See All Reviews >>
SIMILAR BOOKS
Fiction

Machinehood
S.B. Divya
Rave
What did you think of Void Star?
© LitHub | Privacy