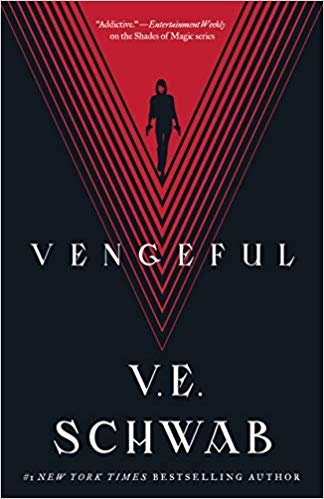 A super-powered collision of extraordinary minds and vengeful intentions. With Marcella's rise, new enmities create opportunity-and the stage of Merit City will once again be set for a final, terrible reckoning.

What The Reviewers Say
Rave Alex Brown,
Tor
V.E. Schwab is one of those authors you just have to read...She is a literary force to be reckoned with, a writer who packs more punch into a single chapter than most do in a whole series. With each new book, Schwab’s already finely honed skills get sharper and fiercer, and Vengeful is no exception. Five years have passed since the terrible events of Vicious . Five long, hard, painful years. Sydney Clarke brought Victor Vale back to life after Eli Ever was captured and imprisoned, but because her gift is also a curse, she brought him back wrong. Victor keeps dying. Again and again, each spell lasting longer than the last. In order to stop his ongoing deaths, Victor is forced down a path he once rejected. He can either be principled and dead or alive and a hypocrite. For Victor, the choice is obvious ... Emotionally eviscerating and coldly calculating, Vengeful weaves a gusty, gory tale with an ending you’ll never see coming.
Read Full Review >>
Mixed Everdeen Mason,
The Washington Post
In Vengeful...V.E. Schwab is at the top of her game, with twisty action, oddball family pairings and unexpected antiheroes you can’t help but root for ... As engaging as these story lines are, as they unfold they sometimes feel a bit inevitable and oddly hollow.
Read Full Review >>
Rave Kayti Burt,
Den of Geek
Vengeful picks up five years after the events of Vicious, and those years have not been kind to this world's central characters. Victor is suffering from the increasingly-serious side effects of having been brought back from the proper dead. Eli has been locked inside of a cell at ExtraOrdinary Observation and Neutralization (EON), an organization set up to catch and contain EOs. Sydney is struggling with her part in Victor's condition, as well as the isolation that comes from being an 18-year-old stuck in a 13-year-old girl's body ... Schwab has crafted a story about villainy, but, within that theme, she explores the resilience of attachment, of family, of love, of belonging—even for those who actively rail and struggle against it ... Vengeful, like Vicious before it, is one of those books, and Schwab is one of those writers.
Read Full Review >>
See All Reviews >>
SIMILAR BOOKS
Coming Soon