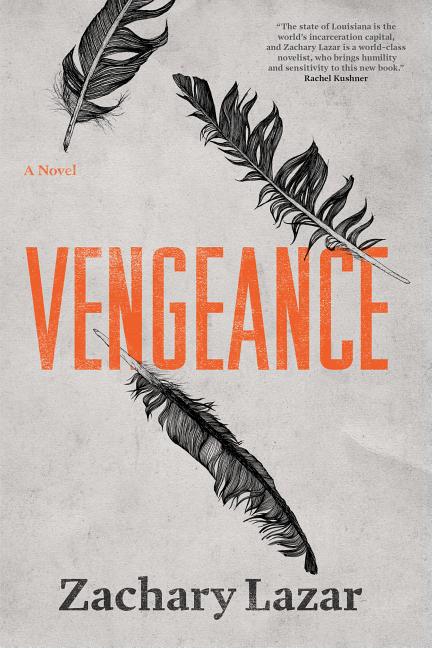 From John Updike Award-winner Zachary Lazar, an autobiographical novel that blurs the lines between fiction and true crime, about a journalist who befriends an inmate at Louisiana's Angola prison. As he attempts to unravel the truth behind the man's supposed crime, he is also confronted with his own past, and re-examines American notions of guilt and penance, racial bias, and the inherent perversity of punitive justice.
Positive
Based on 9 reviews

What The Reviewers Say
Rave Jason Christian,
Vol. 1 Brooklyn
One cannot help but get immersed in this man’s harrowing but compelling story ... reality and fiction are muddled up. Like the tragedy of Hamlet, we get a play within a work of fiction that could itself be real—layers upon layers of story ... It would be tempting to call Vengeance a protest novel, though that label wouldn’t be fair because it makes it seem like art is secondary to the work, and it isn’t. Zachary Lazar is gifted writer, and his sentences often sparkle as much as they surprise ... Vengeance presents a unique challenge to the reader. If the old adage for reading fiction is to 'suspend disbelief,' then one must take the opposite approach for this book: to suspend belief.
Read Full Review >>
Rave Jen Forbus,
Shelf Awareness
Lazar blurs the lines of reality and imagination in this captivating, provocative novel that reads like nonfiction. The stark depiction of Angola, the largest maximum-security prison in the United States, strikes the reader with such force, the sting leaves an emotional mark ... Vengeance is profound in its exploration of the U.S. penal system. It's empathetic without being sentimental in the treatment of its characters, both in and outside the walls of the prison. Lazar's novel is a beautiful specimen of storytelling while simultaneously challenging its audience to reach deep and question the very core of their beliefs. Lazar delivers his tale with language that mirrors the dichotomy of his themes. He can be flowingly poetic or brutally blunt. But he's always effective. Settle in and prepare to be changed by this powerful novel.
Read Full Review >>
Positive Mark Sarvas,
The New York Times Book Review
Lazar’s narrator is a complex creation, and his occasionally clueless privilege — an important part of the story of race in America — is balanced by painful awareness ... What too much autofiction has in common is a weakness for the self-indulgent, for spelling things out and for elevating the quotidian, the banal into thin profundities. In Vengeance, the frame may be wide (prison, racial injustice) but the range of motion can be narrow and Lazar, on occasion, falls into this trap ... But the lapses are few, and Lazar can be deeply moving as he captures the hopelessness that surrounds him ... The families of Vengeance are torn apart by injustice, and Kendrick’s incarceration leaves a half-dozen ruined lives in its wake. Throughout the novel, we feel heartbreaking possibility, the near miss of lives that might have been.
Read Full Review >>
See All Reviews >>
SIMILAR BOOKS
Coming Soon

The Midcoast
Adam White
Positive
What did you think of Vengeance?
© LitHub | Privacy