Vengeance Is Mine, All Others Pay Cash 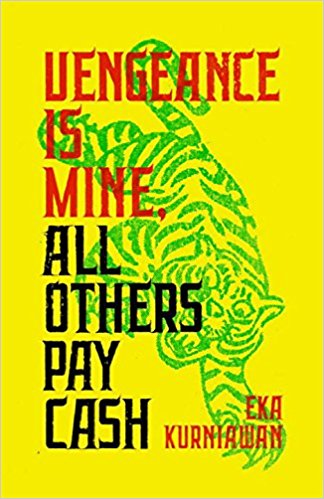 A pulpy, visceral, darkly comic tale of sex, violence and comeuppance about an Indonesian teenager who, after witnessing a violent rape, is rendered impotent and grows up picking fights with strangers to release his frustration.
Positive
Based on 7 reviews

What The Reviewers Say
Rave Jane Yong Kim,
The Atlantic
The semi-comic, pulp-y framing lures readers into what becomes a poignant exploration of an adolescent mind lurching toward maturity ... If the fable-esque set-up seems a bit heavy-handed, Kurniawan avoids that pitfall by wrapping his tale in warmth and candor. He captures the tender rationale of teens in the swell of adolescent transformation, showing (through the character of Gecko, who gladly loans his father to his friend) how intuitively empathetic young people can be toward each other ... . Kurniawan confidently drops in details without explaining them, sets readers down in medias res, and presents dream sequences as though they’re real, always shifting gears with ease. It’s to his credit (and to Annie Tucker’s simple but vibrant translation) that his experiments don’t create reader whiplash.
Read Full Review >>
Rave Tim Hannigan,
The Asian Review of Books
Eka Kurniawan is the Quentin Tarantino of Indonesian literature: a brash wunderkind, delivering gleeful references to pulp fiction, lashings of stylized violence, and an array of characters and scenarios that far surpass the tropes and clichés which inspire them. But as with Quentin Tarantino, one might occasionally wonder just how much substance lies beneath the indisputably stylish surface ... The vignette structure also lets Kurniawan switch rapidly back and forth between different times and places, allowing him to develop a nifty technique of describing an event and its origins in tandem ... All of this is tremendous fun, even if the brutality is sometimes a little hard to stomach ... Perhaps it is best simply to take it like a Tarantino movie: as a sort of bravura, X-rated pantomime, delivered with style and panache by an author who knows he can get away with just about anything. And as high-end pulp fiction, Vengeance is Mine, All Others Pay Cash is superb.
Read Full Review >>
Mixed Bradley Babendir,
The Los Angeles Review of Books
Kurniawan’s novels demonstrate a similar ideology to The Handmaid’s Tale; while Margaret Atwood excavates a dystopic future, Kurniawan does the same to Indonesia’s past and present. The misogynistic structures and worldviews that pervade society inevitably manifest in destructive ways, and when they can, the women persevere, though it couldn’t and shouldn’t be expected of them ... Advancing the idea that the crimes and violence of the powerful is difficult to fight against because of its invisibility is, in itself, a political argument, though it’s not particularly well fleshed out in the book. Without a clear group or institution against which she’s fighting, it becomes violence for violence’s sake alone ... Witnessing and recognizing extreme violence has value, but Vengeance Is Mine struggles with countenancing some violent acts while condemning others ... Despite Vengeance Is Mine’s consistent bloodshed, it’s a very funny book. The humor is dry; Kurniawan is a master at twisting a sentence just right ...Perhaps to its detriment, it is often fun to read, and despite its relative brevity, it is a deeply ambitious book, which makes it equally thrilling and unsatisfying. Vengeance Is Mine has many brilliant moments. But up against the achievements of his first two translated novels, this one feels a little, well, flaccid.
Read Full Review >>
See All Reviews >>
SIMILAR BOOKS
Fiction

Shutter
Ramona Emerson
Positive
What did you think of Vengeance Is Mine, All Others Pay Cash?
© LitHub | Privacy