Upon the Flight of the Queen 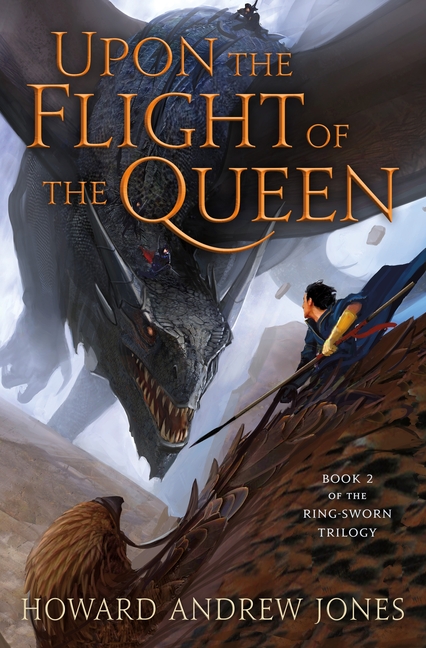 In the sequel to

What The Reviewers Say
Positive Paul Weimer,
Tor.com
Just as the first novel threw a number of fantasy elements and tropes into the story, Upon the Flight of the Queen keeps all of that layered goodness and goes for more. This novel throws in more surprises and fantastic elements into the mix...As a writer, Jones is clearly delighting in his invention, complicating and deepening his world’s tapestry ... entertaining fun. Sieges, infiltrations, dragon riding, high magic, duels, and larger than life characters trying trying to be big damn heroes of their own story. Jones does an excellent job not only giving plenty for Elenai, Rylin and their older mentors plenty to do but to increase tensions, problems, and extending the canvas and scope of the world and the people who inhabit it. Dark things happen in the book, and its not easy sometimes to read about a population under tyranny but the heroic optimistic focus of the first book abides in this second. It would have been easy to go grimdark in the second novel, especially in the Alantris scenes, but the novel keeps its ethos and the novel is stronger for it ... continues to show the promise and strength of the author’s world, characters, style, and ethos in an excellently readable package. This is a middle novel, and although it does more than tread water waiting for the concluding volume, you still can’t start here—but readers of the first book will be well satisfied with this second installment.
Read Full Review >>
Positive Regina Schroeder,
Booklist
Varama’s guerilla resistance, and the spectacular subterfuge of Rylin, are entertaining enough on their own; add in the search for allies and the strange things hidden by the shifting lands, and the web of the tale becomes quite epic ... This straightforward political fantasy is bolstered by the strong character relationships and an interesting world to explore, though background characters and races are often no more than one-note set dressing.
Read Full Review >>
Positive Publishers Weekly
... exhilarating ... This powerful epic fantasy is a heart-racing, action-packed thrill.
Read Full Review >>
See All Reviews >>
SIMILAR BOOKS
Fantasy

40
Alan Heathcock
Positive
What did you think of Upon the Flight of the Queen?
© LitHub | Privacy