Unstrung: Rants and Stories of a Noise Guitarist 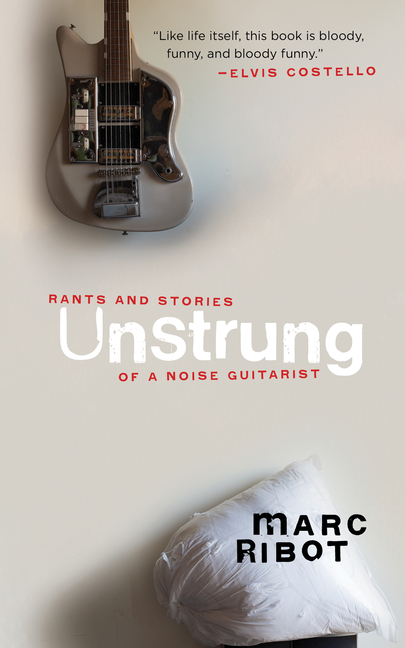 Iconoclastic guitar player Marc Ribot offers up essays and short fiction in this collection that reflects on a life in the music industry.

What The Reviewers Say
Positive Larry Blumenfeld,
The Wall Street Journal
... a slim yet powerful book in which Marc Ribot blends bits of memoir with strange little fictions ... The essays and stories here cohere around connected themes: Artful distortion reveals essential truths; meaningful struggle yields wisdom and rare beauty; unreliable narrators ... Mr. Ribot’s writing wrings maximum meaning from minimalist statements ... 'Lies and Distortion,' the first of the book’s four sections, distills with rare clarity the lessons and epiphanies Mr. Ribot received while on the bandstand ... Mr. Ribot’s most moving passages concern his earliest mentor, the composer and guitarist Frantz Casseus ... In a poignant tribute to Derek Bailey, Mr. Ribot remarks how the English avant-garde guitarist 'let the song be what it is while letting the improvisation go where it goes.' As a musician and, here, as an author, Mr. Ribot embodies that same approach.
Read Full Review >>
Positive Mark Hemingway,
Washington Examiner
The first two essays in the book offer some rather stunning insights into the nature of the electric guitar, its mechanical development, and how the volume and noise it introduced culturally affected music ... He also speaks profoundly and generously about learning from other musicians ... a fascinating examination of musical theory that is both an implicit and explicit plea for cultural understanding. Along these lines, Ribot also offers up a heartfelt and elegiac tribute to his first guitar instructor, Frantz Casseus, a famed Haitian composer who combined elements of classical guitar and Haitian folk music. It’s ultimately a tragic and familiar tale ... the more Ribot strays from the topic of music, the more his writing resembles that of a rhythmically challenged musician who can’t seem to land on the one ... Fortunately, there’s much more worthwhile here ... The few lackluster pieces in the book can be easily overlooked, and at its best, Ribot’s writing resembles his music: It’s challenging, unique, and very humane.
Read Full Review >>
Mixed Cam Lind,
Full Stop
While the book at times presents as self-promotion of Ribot’s undeniable skill, it more often serves as a testament to his decades of experience in the depths of the brutal music industry. He continuously straddles the line between memoir and fiction as he travels an eclectic road of loss, justice, tribute, and blunt humor ... His essays are raw and, as the title affirms, sometimes written with the uncensored energy of a rant ... Ribot ogles his mentors, wide-eyed in his praise, yet at times his writing is cringingly pretentious. The musician’s vernacular often drowns out the childlike wonder he feels for his forebearers, burying his most alluring glimmers of innocence ... he takes on an academic tone, referencing Nietzsche and using excessive ellipses for dramatic effect. In such an eclectic context as Unstrung, these references fall short, alienating the reader from the raw power of the music itself. Ribot is at his best when he says what he means ... although Ribot uses overly specific vernacular at times, lightly edited for the non-musician’s ear, his prose pulls the sympathetic reader into a place of melancholy understanding of the ordinary musician’s struggle ... Bordering on cliché at times, each narrative redeems itself with flashes of dark humor and poignant father-daughter moments. Ribot’s reflections on fatherhood are quietly touching ... Unstrung is pure, full of good intentions in the form of occasional word vomit and abundant sarcasm.
Read Full Review >>
See All Reviews >>
What did you think of Unstrung: Rants and Stories of a Noise Guitarist?
© LitHub | Privacy