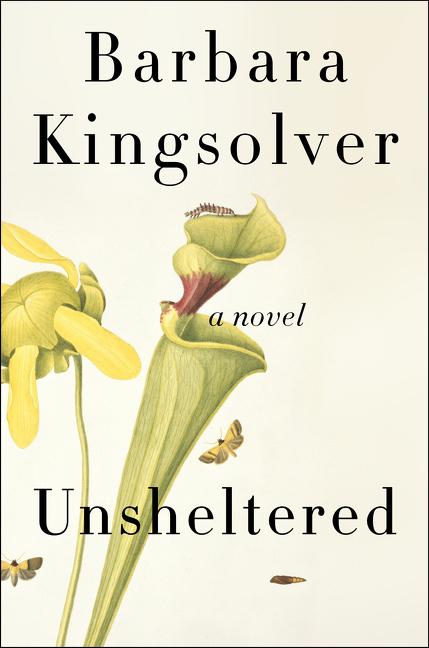 From the award-winning author of Flight Behavior, The Lacuna, and The Poisonwood Bible, a novel alternating between two centuries focusing on two struggling people: present day Willa Knox—whose middle-class life crumbles when the magazine she built her career around folds and the college where her husband had tenure shuts down—and 19th Century science teacher Thatcher Greenwood, who is grappling with a headmaster hostile to his wish to discuss Darwin’s theory of evolution.

What The Reviewers Say
Rave Meg Wolitzer,
The New York Times Book Review
Kingsolver has long written socially, politically and environmentally alert novels that engage with the wider world and its complications and vulnerabilities ... In Unsheltered, she has given us another densely packed and intricately imagined book ... On its own, this economic-disaster narrative would be a sharp, if polemical, cautionary tale, an indictment of American life at an inflection point ... But Kingsolver is a novelist with more elaborate plans ... A dual narrative needs to be not only well choreographed, but also, more important, necessary. Kingsolver’s dual narrative works beautifully here ... The stories occasionally twine together in surprising ways ... Tonally, the book can be a bit loose-beamed. From time to time Kingsolver lingers on a secondary scene for an extra beat, and dialogue between family members can feel studied. But mostly, the accretion of moments generates the feeling of being inside a fully populated house of fiction ... engaged and absorbing.
Read Full Review >>
Rave Ilana Masad,
NPR
[Unsheltered] is incredibly relevant, painfully familiar, gorgeously written ... This dual storyline has the potential to be gimmicky, but Kingsolver makes certain that it isn't, especially as the parallels between the time periods and families are not overt, and it's only over time that we connect them ... Kingsolver doesn't give us solutions, but she reminds us to take comfort in one another when we can, and that hope is necessary even when all seems lost.
Read Full Review >>
Rave Benjamin Evans,
The Guardian
...a powerful lament for the American dream ... Barbara Kingsolver has proved herself a supreme craftsperson over the past three decades. She possesses a knack for ingenious metaphors that encapsulate the social questions at the heart of her stories ... She powerfully evokes the eeriness of living through times of social turmoil ... [a] striking and impressive presentation of family life ... As a work of socially engaged fiction, Unsheltered makes a decent case for escapism.
Read Full Review >>
See All Reviews >>
SIMILAR BOOKS
Fiction

Trust
Hernan Diaz
Rave
What did you think of Unsheltered?
© LitHub | Privacy