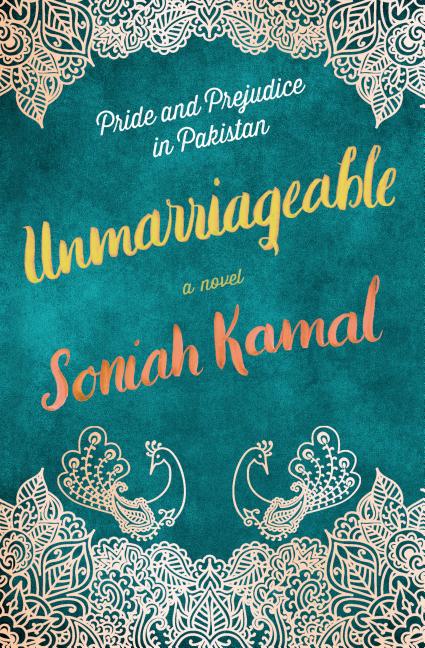 In this one-of-a-kind retelling of Pride and Prejudice set in modern-day Pakistan, Alys Binat has sworn never to marry—until an encounter with one Mr. Darsee at a wedding makes her reconsider.

What The Reviewers Say
Rave Biz Hyzy,
Booklist
The classic plot unfolds, but with rich descriptions of colorful, chiffon anarkalis instead of empire-waist gowns, chai and samosas instead of tea and scones. Kamal’s adaptation of Pride and Prejudice is faithful, with scene-by-scene recreations that will inevitably cause the reader to picture Austen’s original at the same time. Mrs. Binat beautifies her daughters with chickpea masks; Mari bores her sisters with Islamic preachings. That juxtaposition along with plenty of metareferential allusions are what makes this version so much fun. Even the most devoted Austenites will be surprised with how much they judge Darsee as arrogant in the beginning of the novel yet suddenly adore him in the end. This love letter to Austen reexamines sisterhood, society, and marriage in Pakistani culture and includes a fleshed-out epilogue that will satisfy today’s readers.
Read Full Review >>
Positive ILANA MASAD,
NPR
Soniah Kamal's new novel, Unmarriageable, is billed as 'Pride and Prejudice in Pakistan' and it is that, certainly ... In general, the plot of the novel is pretty much the same as Austen's, with the addition of Pakistani traditions and the bells and whistles of the new millennium, so you know what's going to happen. In this way, Unmarriagable seems at first glance like a par-for-the-course retelling, and for readers simply looking for a fun twist on the classic English novel ... But if you're tempted to look further, as I was, you'll find a cheeky undercurrent that echoes Austen's novels' ability to work on two levels... Kamal's Unmarriageable succeeds in being both a deliciously readable romantic comedy and a commentary on class in post-colonial, post-partition Pakistan, where the effects of the British Empire still reverberate ... While at times the dialogue is heavy-handed, ultimately Unmarriageable manages to be both a fun, page-turning romp and a thought-provoking look at the class-obsessed strata of Pakistani society.
Read Full Review >>
Positive Maureen McCarthy,
Minneapolis Star Tribune
... delightful ... The plot is no surprise ... But Kamal knows that it’s the journey rather than the destination that keeps Austen fans coming back, and she winds interesting variations on the themes to provide a tour of her native country and update some of the anachronistic elements of the original story.
Read Full Review >>
See All Reviews >>
SIMILAR BOOKS
Fiction

Girl A
Abigail Dean
Rave
What did you think of Unmarriageable?
© LitHub | Privacy