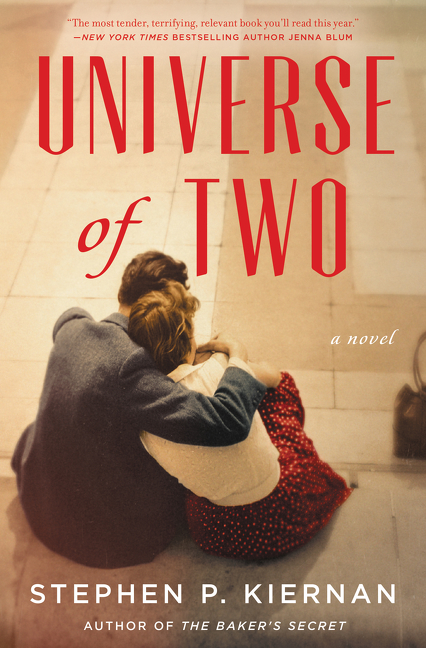 Graduating from Harvard at the height of World War II, brilliant mathematician Charlie Fish is assigned to the Manhattan Project. Once the atomic bombs strike Hiroshima and Nagasaki, feelings of culpability devastate him and his wife, Brenda, who attempt to make amends for the evil they feel responsible for bringing into the world.

What The Reviewers Say
Rave Jessica Brockmole,
Historical Novel Society
Stephen P. Kiernan writes with heart and humor. Both Brenda and Charlie are flawed and interesting, dealing with the disruptions of young love and uncertain war. Kiernan manages to balance serious historical questions and ethical issues with lively characters, sharp dialogue, and marvelous historical detail ... a great read.
Read Full Review >>
Rave Cynthia A. Graham,
The New York Journal of Books
With Charlie’s narration being told through present-tense war time, and Brenda’s looking back through older and wiser eyes, this telling is an effective tool to merge both the urgency of the moment and the lessons learned from it ... neither a justification nor an apology. Rather it is an even-handed examination of the urgency of war against our own complicity in the violence we visit upon others ... carries within it a powerful story of hope without minimizing the weight of the effects of war. It is an honest, compelling tale of the human cost of war and the fight that occurs when war ends and redemption begins.
Read Full Review >>
Mixed Anne C. Heller,
The Washington Independent Review of Books
... delivers the mild, pleasing-though-antiquated satisfactions of a World War II movie starring, say, Steward Granger and Donna Reed ... The 'weak-chinned' but resolute young man learns to solder expertly — if way too slowly for readers’ comfort ... The portrait of the workstations and barracks at Los Alamos through Charlie’s initially innocent eyes is mildly interesting. As he becomes increasingly aware of the disturbing nature of his work, the narrative becomes urgent ... There isn’t a lot of suspense built into Universe of Two. Readers know long before Charlie does what he’s working on and how it will be used. They also know that for all the crossed signals between Brenda and Charlie, the two will marry and share a long and happy life ... A cloying note on which to end a sentimental but well-intentioned book.
Read Full Review >>
See All Reviews >>
SIMILAR BOOKS
Fiction

Act of Oblivion
Robert Harris
Rave
What did you think of Universe of Two?
© LitHub | Privacy