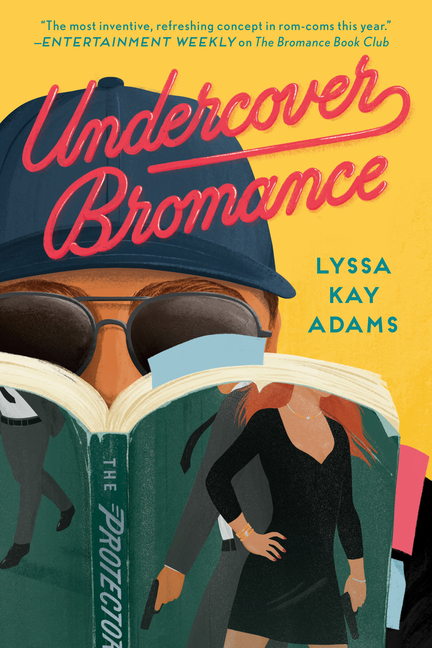 In this sequel to The Bromance Book Club, local club owner helps a recently fired sous-chef get revenge on her boss.

What The Reviewers Say
Positive Rebecca Munro,
Bookreporter
Lyssa Kay Adams once again employs men reading romance as clever and thought-provoking advice to explore what women want and how society fights against them getting it ... I have to say I did not love this sequel as much as I did the original. Whereas the first book included extracts from regency romance novels and had a more even balance between love and emotion, this one was much more suspense-driven than I was anticipating. As this is only book two in the series, I will be interested to see if future volumes also mimic the books that the Club is reading. I am really hoping for more of those romance extracts, rather than seeing the characters only act out the books they are reading ... Although The Bromance Book Club is the stronger of the two titles, Undercover Bromance is still a must-read for anyone who enjoyed the opening installment.
Read Full Review >>
Positive Publishers Weekly
Adams follows The Bromance Book Club with this cute comedic twist on the romantic suspense genre ... series fans may be disappointed that, unlike in the first volume, no excerpts from the novel within a novel appear. Instead Adams weaves romantic suspense tropes into her contemporary rom-com to excellent effect. Strong characterization, humor, and a genuine connection between Liv and Mack make this one a keeper.
Read Full Review >>
Mixed Kirkus
Adams...clearly intends for Royce to be a Harvey Weinstein–like figure ... Unfortunately, the tone of the novel reduces #MeToo to a madcap caper, including fart jokes, traffic jams, and macho posturing. The victims of Royce’s sexual harassment are used as a plot device, allowing Liv, Mack, and the other book club members to swoop in and save the day ... A romance attempting to tackle #MeToo misses the mark.
Read Full Review >>
See All Reviews >>
SIMILAR BOOKS
Fiction

Recipe for Persuasion
Sonali Dev
Positive
What did you think of Undercover Bromance?
© LitHub | Privacy