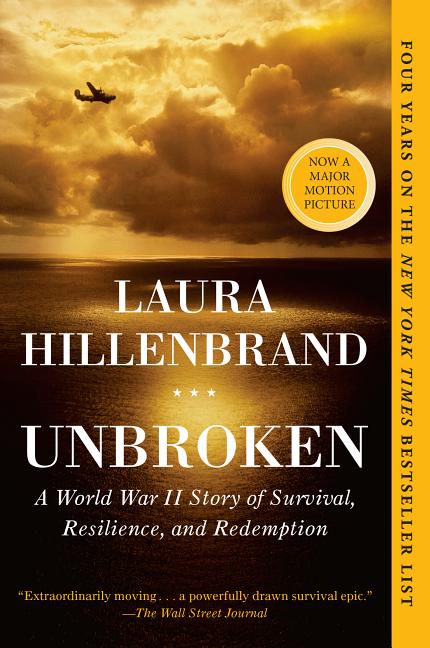 The bestselling author of Seabiscuit narrates the life of Louis Zamperini, who went from boyhood delinquent to Olympic runner. But when war canceled the games in 1940, Zamperini became U.S. airman—until his plane crashed in 1943 in the Pacific Ocean, where he survived for more than a month adrift at sea before being captured by the Japanese.

What The Reviewers Say
Rave Kevin Rushby,
The Guardian
Anyone who enjoyed Hillenbrand's previous book, Seabiscuit, will know that she has a fine line in compelling narrative. Unbroken is no different: meticulously researched and powerful. The reader, unlike the airmen, would rather the days adrift went on longer ... In Zamperini...Hillenbrand has discovered a man of complexity and wisdom who can look back from his great age and see the pattern of his life emerge ... Here is the story that few PoW books have bothered to tell: of a man struggling to escape an inescapable past ... Hillenbrand marches second world war literature right back into the spotlight.
Read Full Review >>
Mixed David Margolick,
The New York Times Book Review
His is one of the most spectacular odysseys of this or any other war, and 'odyssey' is the right word, for with its tempests and furies and monsters, many of them human, Zamperini’s saga is something out of Greek mythology ... It’s also yet another testament to the courage and ingenuity of America’s Greatest Generation, along with its wonderful, irrepressible American-style irreverence ... Hillenbrand is particularly well suited to tell this inspiring tale. Apart from a rocky beginning (when, seeming to lack confidence in her main character, she hypes him), she is intelligent and restrained, and wise enough to let the story unfold for itself. Her research is thorough, her writing (even on complicated, technical wartime topics) crystalline. Unbroken is gripping in an almost cinematic way. In only one sense does it disappoint, but it’s important: that is, in its portrait of the hero himself ... virtually everything about Zamperini is filtered through her capable yet rather denatured voice, and we don’t really hear him. So, while a startling narrative and an inspirational book of a rather traditional sort, Unbroken is also a wasted opportunity to break new psychological ground.
Read Full Review >>
Rave Jane Ciabattari,
Los Angeles Times
Hillenbrand tells [Zamperini's] story as a nearly continuous flow of suspense ... Hillenbrand's vivid accounts of battles, technological advances such as the top-secret Norden bombsight, explanations of Japanese policy toward POWs (including a 'kill-all' order at war's end) as well as her footnotes and acknowledgments detailing her research are all worthy of careful reading. But it is the tension of Zamperini's fight to live in barbaric conditions that makes Unbroken so disturbing and thrilling.
Read Full Review >>
See All Reviews >>
SIMILAR BOOKS
Biography

Topgun
Dan Pederson
Positive
What did you think of Unbroken: A World War II Story of Survival, Resilience, and Redemption?
© LitHub | Privacy