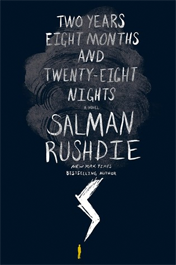 After a storm strikes New York City, the strangenesses begin. Unbeknownst to the characters, they are all descended from the whimsical, capricious, wanton creatures known as the jinn, who live in a world separated from ours by a veil.

What The Reviewers Say
Positive Carolyn Kellogg,
The Los Angeles Times
Two Years Eight Months and Twenty-Eight Nights is erudite without flaunting it, an amusement park of a pulpy disaster novel that resists flying out of control by being grounded by religion, history, culture and love.
Read Full Review >>
Mixed Ursula K. Le Guin,
The Guardian
Rushdie has a fractal imagination: plot buds from plot, endlessly. There are at least 1,001 stories and substories, and nearly as many characters. All you need to know is that they’re mostly highly entertaining, amusing and ingenious.
Read Full Review >>
Pan Marcel Theroux,
The New York Times
The new novel quickly becomes a breathless mash-up of wormholes, mythical creatures, current affairs and disquisitions on philosophy and theology. Behind its glittery encrustations, the plot resembles the bare outline for a movie about superheroes.
Read Full Review >>
See All Reviews >>
SIMILAR BOOKS
Fiction

All the Broken Places
John Boyne
Mixed
What did you think of Two Years Eight Months And Twenty-Eight Nights?
© LitHub | Privacy