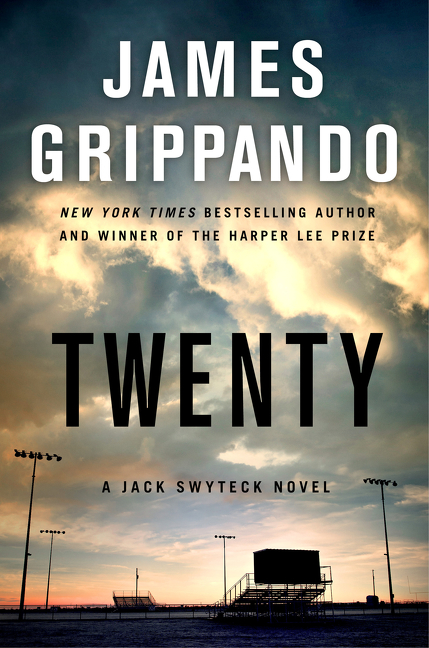 Jack Swyteck and his family are caught in the crossfire after a deadly school shooting claims 20 casualties--Florida's fifth mass shooting in as many years--in this provocative and timely thriller from Harper Lee Prize-winner Grippando.

What The Reviewers Say
Rave Pamela Kramer,
Bookreporter
... gripping ... There’s a reason that James Grippando is a New York Times bestselling author and the recipient of the Harper Lee Prize for Legal Fiction ... His writing veritably reeks of authenticity, and the courtroom scenes are perfectly believable. Jack’s struggles with what he can and cannot divulge to his wife are also realistic, as is her refusal to share certain information with him ... By the climax, the intrigue and action become engrossing thanks to Grippando’s skill and talent. And while there are 16 previous Jack Swyteck novels, I didn’t feel out of the loop at all for not having read any of them. Twenty certainly works well as a stand-alone title, but it also will inspire readers to delve into Grippando’s backlist, so be prepared.
Read Full Review >>
Rave Ray Palen,
Criminal Element
... really moves at a breakneck pace ... What begins as a thriller and then moves into a legal novel, devolves into a full-blown espionage story that calls to mind the work of Brad Thor, among others. As I mentioned at the beginning, when the significance of the number twenty is finally revealed it will send chills down your spine and you will soon realize that this is unlike any other Jack Swyteck novel to date.
Read Full Review >>
Positive Oline H. Cogdill,
The South Florida Sun Sentinel
... hile compassionate and mindful of the victims, Grippando skillfully leads the plot into a story about terrorism, capital punishment, rumors and parenting ... Grippando leads Twenty through a complex plot that maintains its sense of realism until the surprising finale. Jump-starting a story with a school shooting is a risky move, but Grippando handles it well as he builds a plot and solid suspense in another direction.
Read Full Review >>
See All Reviews >>
SIMILAR BOOKS
Fiction

Mirrorland
Carole Johnstone
Positive
What did you think of Twenty: A Jack Swyteck Novel?
© LitHub | Privacy