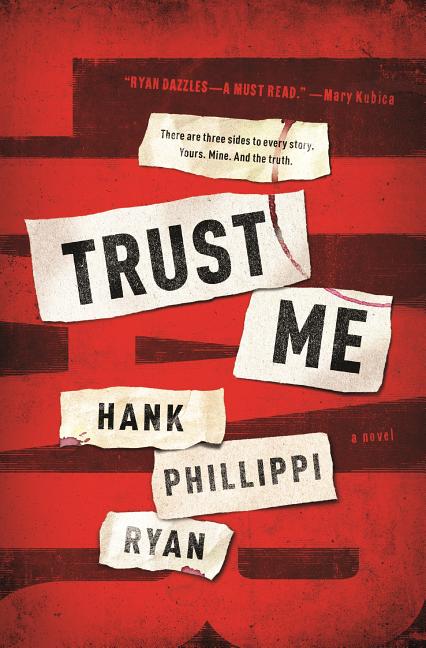 An unlikely alliance between an accused killer who swears she is innocent and a grieving journalist trying to rebuild her shattered life leads to a dangerous game of cat-and-mouse.

What The Reviewers Say
Rave Hank Phillippi Ryan,
Book Reporter
That’s the prosecutor’s mantra in the murder trial of Baby Boston, aka Tasha Nicole Bryant; only Ashlyn could have killed Tasha. The child’s ravaged body was found in a garbage bag, dumped in Boston Harbor. The mother, Ashlyn, swears she didn’t do it. That’s no surprise. What defendant doesn’t flat-out deny guilt? For now, though, she sits in jail, awaiting trial. And the reigning opinion goes that only Ashlyn could have done it. At least, that’s what Mercer Hennessey firmly believes from all she’s heard ... Hank Phillippi Ryan’s stand-alone psychological thriller has more twists and turns than Lombard Street in San Francisco, and takes you down a slope as slippery. Just when you think you have it figured out, Ashlyn comes up with another story. She tells one, then says it’s a lie, then claims it was true, but maybe not. In the end, you’ll have to figure out who killed baby Bryant. Ashlyn certainly won’t help. Or maybe she will. Trust me, though, you’ll have chills when you finish this one.
Read Full Review >>
Positive Jeff Ayers,
New Jersey Herald
...Mercer Hennessey was a well-respected news writer but she gave it up to be with her family. She was a loving wife and devoted mother, but an accident changed everything and now she's a widow. She knows she needs to pick herself up but doesn't dare take that first step back to the real world. When her former boss offers her the chance to write a tell-all book about a significant trial, Mercer can't refuse. A television feed from the courtroom to her living room will allow her to stay private while also rediscovering the joy of writing. The issue Mercer has to grapple with is the case itself. Ashlyn Bryant is accused of murdering her young daughter ... Ryan is an expert at telling a story that invokes suspense with emotional resonance. Strong feelings like grief, anger and love ooze off the page while realistic characters make the reader care about every tiny detail of the story. And just when it starts to lean toward being predictable, Ryan throws in a huge twist to completely upend the narrative.
Read Full Review >>
Positive John Valeri,
Criminal Element
As Trust Me opens, readers are introduced to bereaved Boston journalist, Mercer Hennessey, who has put her career on hold in the aftermath of an auto accident that killed her husband, Dex, and young daughter, Sophie. Reclusive by choice, she is tempted to take her first tentative steps back into the immersive world of work when her former editor, Katherine Craft, offers her the opportunity of a lifetime: to write a blockbuster book chronicling the trial of party mom Ashlyn Bryant, accused of killing her two-year-old daughter, Tasha Nicole ... Trust Me is a taut psychological thriller that puts a fresh, fiendish spin on the unreliable narrator gambit—an accomplishment in and of itself.
Read Full Review >>
See All Reviews >>
SIMILAR BOOKS
Coming Soon

On Java Road
Lawrence Osborne
Rave
What did you think of Trust Me?
© LitHub | Privacy