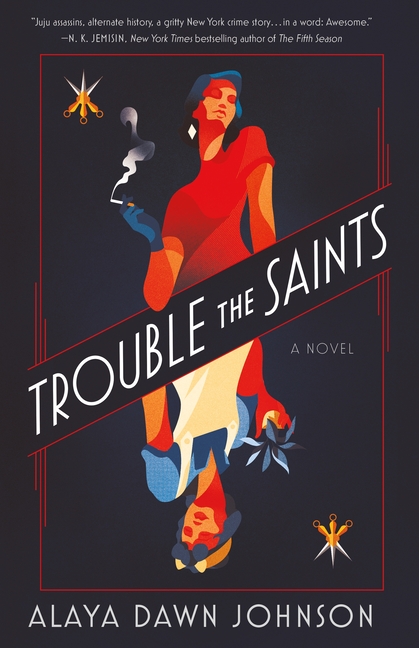 Amid the whir of city life, a young woman from Harlem is drawn into the glittering underworld of Manhattan, where she’s hired to use her knives to strike fear among its most dangerous denizens.

What The Reviewers Say
Rave Em Nordling,
Tor.com
... interweaves history and unreality, the atmosphere of noir and the magic of fantasy, to form a moving, literary love story. It’s anything but a traditional love story, though. The love in its pages is romantic, familial, platonic, and generational—it is beautiful and it is painful in the way only beautiful things can be ... Johnson writes sex and longing without ever substituting one for the other, with scenes as steamy as they are fraught with emotion. Deep friendships, familial relationships, and even acquaintanceships are described with no less nuance and care ... The intensity of Johnson’s portrayal of love and sacrifice make the novel’s perspective on racism all the more effective ... It would be easy therefore to say that Johnson writes hate as well as she writes love, but I think the poignancy of the novel is in the complexity of their interplay ... the prose in this novel will pull you in even when the story moves slowly. And it does move slowly, missing traditional story beats in favor of a narrative that unravels with the logic and fluidity of a poem. It’s worth every turn of phrase ... just plain gorgeous. It is gritty and violent and achingly real, but stitched through with fantasy. It is bittersweet and affective, but subtle and sneaking in its emotionality. But above all: how nice to be drawn into a story so bursting at the seams with love in all its beauty and terror.
Read Full Review >>
Positive Danny Lore,
NPR
This seems standard enough — the classic noir tale of an assassin desperate to be done with the life. I'd admittedly be into this trope no matter what, but Johnson gives us far more than that ... What she's wrestling with aren't the standard noir tropes: Here, Johnson's themes and threats have as much in common with Nella Larsen's Passing and Mat Johnson's Incognegro as they do with any Richard Stark or Raymond Chandler yarn ... As much as I loved Walter and Dev, however, some of their racial positioning gave me pause. There were moments where I wondered how much that part of their identity (Walter is Native American and Dev is Indian) was being treated more as window dressing than being Black or white was, for Black and white characters. Johnson struggles with this in her depiction of Dev, who in other ways is just as complex as Phyllis, attracted to her violence but in love with her as a person. Walter is similar, nicknamed Red Man by the white men who fear him. It seems like Johnson intends that problematic name to parallel the way the book sees Phyllis vs. Pea. However, when Walter isn't a protagonist — and he hasn't chosen the name the way Phyllis chose Pea — it doesn't work the same way ... there is a complex sometimes-queer story between Phyllis and Tamara that I wish was better developed, and while the sex scenes are usually well done, I'm not sure I will ever recover from the comparison to, uh ... okra ... that happens at one point ... the violence is slick and impressive when we have to wrestle with it ... Alaya Dawn Johnson refuses to allow her protagonists — or her readers — to get out of the repercussions of their actions. The protagonists handle the immediate threats with all the skill and messiness of adults forced into corners, but war, racism, the mob and the law still hang over them. They're only allowed the outs that they have earned — and whether they can ever earn that happiness is the central question of the narrative ... Put together by a masterful wordsmith, Trouble the Saints gives us a tale of how agency doesn't always equal freedom, and solutions don't always lead to success, with characters you desperately hope make the right choice — even when that choice doesn't exist.
Read Full Review >>
Positive Bezi Yohannes,
Tor.com
... takes an eerie and suspenseful noir approach to a long line of Black literature about passing and assimilation ... By tying Phyllis’ passing to her life as an assassin, Johnson reveals that passing is not just about passive self-protection; it’s about access to power and complicity in violence under white supremacy.
Read Full Review >>
See All Reviews >>
SIMILAR BOOKS
Fantasy

Ordinary Monsters
J M Miro
Positive
What did you think of Trouble the Saints?
© LitHub | Privacy