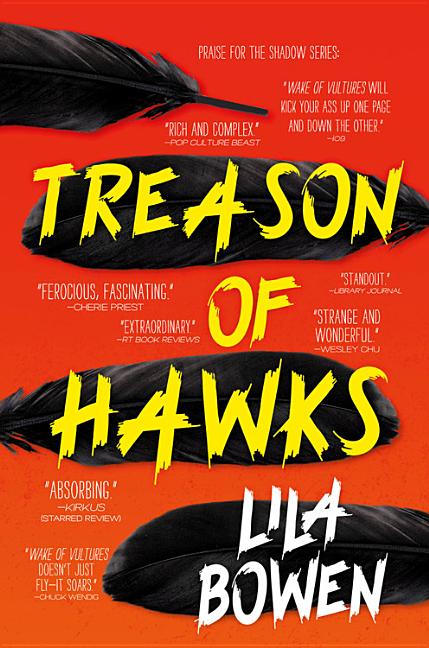 The climactic conclusion to the award-winning fantasy series. Rhett Walker is looking for peace, the memories of all he's lost haunting his dreams.

What The Reviewers Say
Positive Anna Mickelsen,
Booklist
Satisfying ... Bowen has created a historical fantasy western setting with richly drawn, intersectional characters who brashly forge their own identities in a dangerous territory. Highly recommended for fans of Buffy the Vampire Slayer, the Weird West, and historical fantasy. Some may want to catch up on the first three volumes of the Shadow series before reading this one.
Read Full Review >>
Positive Alex Brown,
Tor.com
Never lets up on the tension ... Lila Bowen demonstrates once again how adept she is as writing difficult characters ... I’m not entirely convinced the way the conflict was resolved is strong enough to close out the series. There was a lot of bringing back old characters and coming to terms with things, but upon reflection, Treason of Hawks felt less like the climax of four books worth of mounting tension and more like tying up loose ends ... Overall, Treason of Hawks is a strong story that soars when it finally gets around to dealing with issues that have been piling up throughout the series. With high octane action and irresistible characters, the Shadow series is one of the best weird west fantasies out there. I’m sad to see Rhett go, but I’m glad that his final story is as good as this one.
Read Full Review >>
Rave Publishers Weekly
Thrilling ... Bowen’s wild and weird West, populated with all manner of supernatural beasties, is fully realized, and she barely lets up on the gunslinging action ... The final battle is bloody, fierce, and heartbreaking, and the hopeful conclusion is a fine feather in the cap of Bowen’s uniquely superb series.
Read Full Review >>
See All Reviews >>
What did you think of Treason of Hawks?
© LitHub | Privacy