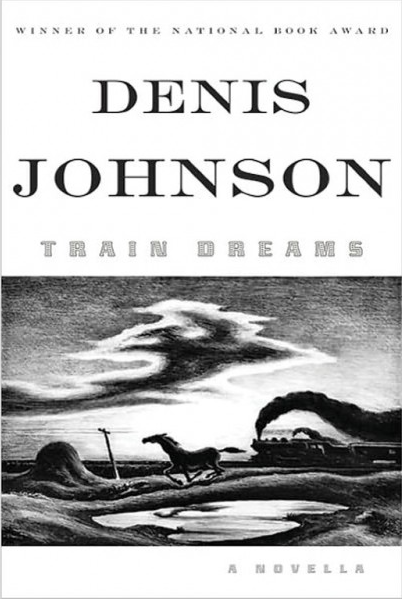 A novella that captures the transformations of the twentieth century as it outpaces Robert Grainier and his version of the American West.

What The Reviewers Say
Rave Anthony Doerr,
The New York Times Sunday Book Review
What Johnson builds from the ashes of Grainier’s life is a tender, lonesome and riveting story, an American epic writ small, in which Grainier drives a horse cart, flies in a biplane, takes part in occasionally hilarious exchanges and goes maybe 42 percent crazy … Johnson is as skilled as ever at balancing menace against ecstasy, civilization against wilderness. His prose tiptoes a tightrope between peace and calamity, and beneath all of the novella’s best moments, Johnson runs twin strains of tenderness and the threat of violence … The novella runs 116 pages, and you can turn all of those pages in 90 minutes. In that hour and a half the whole crimped, swirling, haunted life of Robert Grainier rattles through the forests of your mind like the whistle of the Spokane International he hears so often in his dreams.
Read Full Review >>
Rave James Wood,
The New Yorker
This novella is indeed simpler and sparer than anything else Johnson has written … The visionary, miraculous element in Johnson’s deceptively tough realism makes beautiful appearances in this book. The hard, declarative sentences keep their powder dry for pages at a time, and then suddenly flare into lyricism; the natural world of the American West is examined, logged, and frequently transfigured … I started reading Train Dreams with hoarded suspicion, and gradually gave it all away, in admiration of the story’s unaffected tact and honesty … [Grainier’s] life has been, in some ways, an obscure anomaly, spent, in the heart of the twentieth century, pretty much as it might have been a hundred years earlier. Johnson’s novella has an elegiac tinge.
Read Full Review >>
Rave David L. Ulin,
The Los Angeles Times
Set in the rural West, Train Dreams is a portrait of containment, of compression and restraint … Grainer lives, works and suffers tragedy; he loses his wife and baby daughter and must find a way to go on. He watches the world grow up around him, yet manages to keep his distance and continue living as he knows … Born in one century, living mostly in another, he becomes a three-dimensional metaphor for the industrialization of the country, the slow passage from rural to commercial, the commodification of our collective soul … Johnson gets at the key issue of his writing: the fluid divide between spirit and substance, his sense that the metaphysical is always with us, even if we can't decipher what it means.
Read Full Review >>
See All Reviews >>
SIMILAR BOOKS
Fiction

Each of Us Killers
Jenny Bhatt
Rave
What did you think of Train Dreams?
© LitHub | Privacy