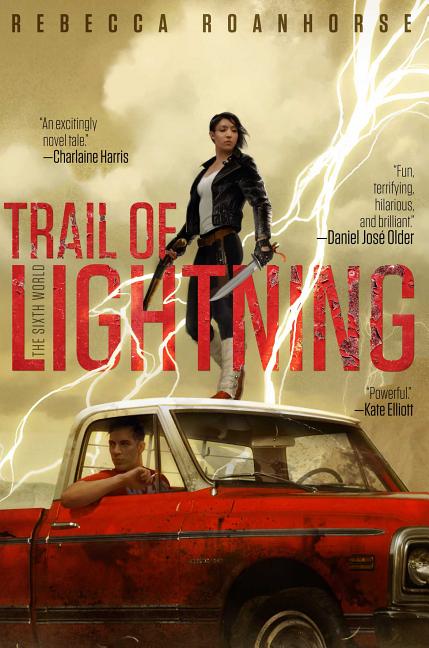 Maggie Hoskie is a Dinâetah monster hunter, a supernaturally gifted killer. When a small town needs help finding a missing girl, Maggie is their last best hope. But what Maggie uncovers about the monster is much more terrifying than anything she could imagine.

What The Reviewers Say
Rave Alex Brown,
Tor.com
Rebecca Roanhorse is an author to watch. She knows her stuff, how to twist the knife to make it hurt so good and how to turn the screw to make it almost too stressful to handle ... Roanhorse takes the time to show the repercussions of Maggie’s experiences. What grounds her, what makes her a relatable character isn’t just what she goes through, but how she faces it and how it haunts her anyway. In the real world we can’t wave a magic wand over our pain, and neither can Maggie. In Maggie we see the vast extent of damage trauma inflicts on survivors ... While Roanhorse doesn’t hold your hand through the culturally-specific bits, she does offer the reader enough context to figure it out on their own ... It’s rural fantasy at its finest ... a frakking awesome novel and a fantastic prelude to what is sure to be a thrilling series.
Read Full Review >>
Mixed Amal El-Mohtar,
The New York Times
Maggie is a monster hunter who emerges from isolation to help find a missing girl—but the creature that stole her is rooted in parts of Maggie’s past she’d rather not confront...Since Maggie needs help investigating this new threat, her adopted grandfather suggests she work with his smooth-talking grandson Kai. Short on friends and long on enemies, Maggie lets him tag along.But problems of plot and motivation nagged me throughout. In the book’s opening encounter, Maggie takes grotesque action on a flawed premise — but that first action is never revisited or questioned once Maggie learns better. Nor was the plot’s resolution as satisfying as it could have been, though it neatly sets up a sequel.
Read Full Review >>
Positive Laura Hubbard,
Bookpage
After a sudden climate apocalypse, one of the only places left intact was Dinétah, a former Navajo reservation that has become a land where gods and supernatural heroes walk among humans. Preternaturally deadly monster hunter Maggie Hoskie is one of the byproducts of the supernatural rebirth of Dinétah. When her search for a missing girl and her monstrous captor goes south, Maggie is left with questions. Who created the monster that abducted the girl, and why? Maggie’s investigation leads her to reluctantly team up with Kai Arviso, an overly charismatic young medicine man with powers of his own. The further they dig to find the truth behind the monster, the more Maggie is forced to recognize that confronting her past may be the key to solving the mystery ... Trail of Lightning, the first in the Sixth World series by debut novelist Rebecca Roanhorse, is one of those books that grabs you by the hand and makes you listen.
Read Full Review >>
See All Reviews >>
SIMILAR BOOKS
Fantasy

Flyaway
Kathleen Jennings
Rave
What did you think of Trail of Lightning?
© LitHub | Privacy