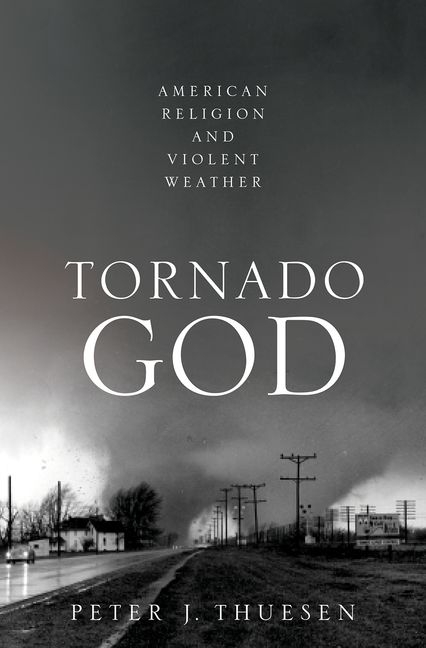 A Professor of Religious Studies argues that, in the tornado, Americans experience something that is at once culturally peculiar (the indigenous storm of the national imagination) and religiously primal (the sense of awe before an unpredictable and mysterious power). He also claims that, in an era of climate change, the weather raises the issue of society's complicity in natural disasters—forcing Americans to confront the question of destiny and their control over their own.

What The Reviewers Say
Rave Steve Donoghue,
Open Letters Review
Thuesen is insightful and interesting and even witty on a whole range of natural disasters that have struck America in the last three centuries. He’s combed through the frightened and impressionistic newspaper accounts that tend to follow such disasters, and he’s carefully non-demagogic about charting the interpretations of the countless priests and ministers who’ve sought to explain the inexplicable, to rationalize the irrational, and sometimes to weaponize an omni-directional explosion. Thuesen does this without much more than a trace of anger; the little miracle of Tornado God is that it can tell so many stories of credulousness and hypocrisy without becoming embittered by it all. The book will fascinate the many thousands of Americans who live in tornado country and will hear the familiar dolorous klaxon several times this summer (and perhaps be unfortunate enough to hear various clergy members try to make sense of a ten-block swath of devastation). But Tornado God has points of interest for any reader who’s wondered what an ‘act of God’ may or may not say about the deity. And the book arrives on the doorstep of the American hurricane season.
Read Full Review >>
Rave Barton Swaim,
The Wall Street Journal
The book is a superb work of scholarship, distilling a vast array of work on meteorology, theology and American history. Mr. Thuesen, a professor of religious studies at Indiana University-Purdue University Indianapolis, has a special interest in violent storms, especially tornadoes, and writes about them with narrative skill ... Mr. Thuesen ends his book with a lengthy discussion of religious responses to climate change, and as an account of recent history it’s accurate and helpful.
Read Full Review >>
Positive Randall J. Stephens,
The Washington Post
... ﻿insightful and deeply researched ... [Thuesen's] focus on extreme weather and the sublime is particularly interesting given that Americans are far more religious than their counterparts in other wealthy nations. Tornadoes are also much more common in the United States than in other parts of the world, and they occur more frequently in the Bible Belt, the locus of American evangelicalism and Pentecostalism .
Read Full Review >>
See All Reviews >>
What did you think of Tornado God: American Religion and Violent Weather?
© LitHub | Privacy