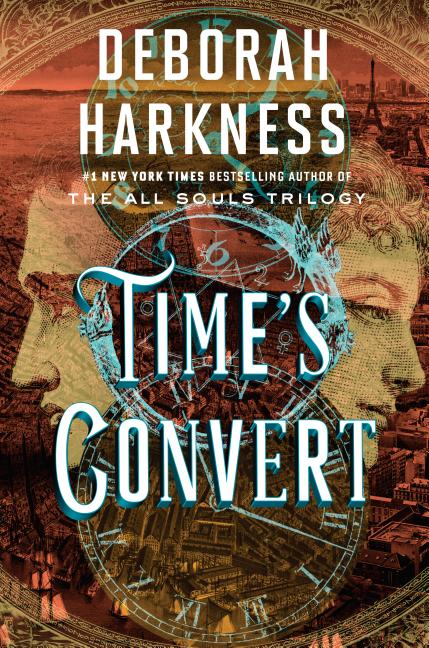 Marcus has fallen for Phoebe Taylor so she decides to become a vampire, too, and though the process at first seems uncomplicated, the couple discovers that the challenges facing a human who wishes to be a vampire are no less formidable in the modern world than they were in the 18th century.

What The Reviewers Say
Positive Stephenie Harrison,
Bookpage
...Set in the same world as Harkness’ previous novels, Time’s Convert is not simply a continuation of The Book of Life...it is Matthew’s son, Marcus, and his fiancée, Phoebe, who take center stage. With this couple, Harkness is allowed to do what she does best, weaving a rich and mesmerizing love story that jumps between past, present and future, as she delves into Marcus’ origin story and juxtaposes it with Phoebe’s own struggles as a fledgling vampire. Harkness’ depictions of Revolution-era America and France are vivid and detailed, while her examination of the various ways one can form a family and all its inherent complications are thoughtful and moving ... For those who have already read Harkness’ previous books, Time’s Convert is a welcome reunion with old friends.
Read Full Review >>
Mixed Paula L. Woods,
The Los Angeles Times
...Harkness brings her keen historian’s eye to the American and French revolutions, drawing parallels between the two periods through not only the vampire witnesses to history but the appearances of historical figures ... But without the quest to find Ashmole 782 that drove the first three books, Time’s Convert feels aimless and is susceptible to Harkness’ tendencies to cram her novels full of interesting details of questionable value to the plot and myriad characters who are name-checked but never appear in the flesh. The result is a novel that feels bloated instead of buoyant as it carries a new generation of de Clermont offspring on their own adventures.
Read Full Review >>
Rave Margaret Flanagan,
Booklist
...This time around, she focuses on a previously introduced minor character who demonstrates that it’s not always easy to make the leap from humanhood to vampiredom.​ When young surgeon Marcus MacNeill, nearing certain death, meets Matthew de Clermont during the American Revolution, he jumps at the chance at immortality proffered by Matthew. However, the transition proves to be more difficult than expected, as his background and his innate sense of self continually vie with new expectations and challenges. Effortlessly sweeping across time and continents, Harkness replaces the captivating Matthew and Diana dynamic with a passionate new love story when Marcus meets Phoebe Taylor in contemporary London.
Read Full Review >>
See All Reviews >>
SIMILAR BOOKS
Fantasy

A Marvellous Light
Freya Marske
Rave
What did you think of Time's Convert?
© LitHub | Privacy