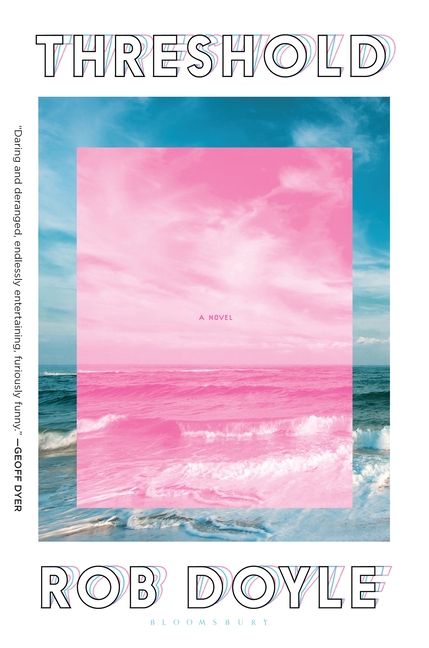 The narrator of Rob Doyle's Threshold has spent the last two decades traveling, writing, and imbibing drugs and literature in equal measure. Now, stranded between reckless youth and middle age, his travels to far-flung places have acquired a de facto purpose: to aid the contemporary artist's search for universal truth.

What The Reviewers Say
Positive Ryan Chapman,
Inside Hook
... the great drug novel of our time ... crucially, his book is generous and honest as few contemporary fictions are these days ... Threshold innovatively merges the first-person intimacy of memoir, journalistic research, and the deathless hedonism of untethered youth—with a light touch ... Humor, psychic struggle, the world, and all those drugs. In our new reality of high indoors, we look to books to take us somewhere. Threshold takes us everywhere.
Read Full Review >>
Positive Parul Sehgal,
The New York Times Book Review
When it comes to reading in an emergency, in a moment of crisis and uncertainty, comfort seems to be the order of the day — old favorites, regressive pleasures, cozy classics ... What happens if they fail you? Mine have...so I am here to champion the opposite: the enlivening, more absorbing distractions of disagreement, argument and pure pique, of being profitably at odds with what you are reading; the deep diversion of a good, cleansing quarrel, especially with a book that is game and gleefully provocative. Threshold, a nettlesome new novel — surly, ambitious, frequently annoying — has been my treasured companion of late ... Rob — the loafer and the mope, the impressively successful Lothario and pretentious little troll — is the protagonist of this book, which could be called autofiction (the author is also named Rob Doyle), anti-woke polemic or obsessive riff. It isn’t much interested in classification — in fact, it would rather like to annihilate pointless distinctions outright, much like the character himself, who is on a fervent spiritual quest with the aid of acid, meditation, magic mushrooms and ayahuasca ... Are you wincing with irritation yet? Good; irritation is this narrator’s specialty. He’d like to be 'a hate figure, a Shylock,' but he wonders if he has the nerve ... Doyle enjoys poking fun at Doyle, his habit of making sure his books are stocked at various bookstores, his dour pomposity ... Large swaths of Threshold — the would-be writer making pilgrimage to the homes of his heroes, in order to do anything but write — feel beholden to Out of Sheer Rage, Geoff Dyer’s affectionate tribute to procrastination, via an attempted biography of D. H. Lawrence. Sections in which Rob haunts museums...feel heavily indebted to Ben Lerner’s novels ... At another point, it is one of Karl Ove Knausgaard’s most famous passages that is channeled as Rob scribbles in his notebook ... Still other scenes recall Milan Kundera.
Read Full Review >>
Positive Anthony Cummins,
The Observer (UK)
...Threshold...takes the form of 11 freewheeling, pharmaceutically messy vignettes in which a not-so-young literary man roams far-flung locales; Dyer, whose praise for Doyle appears on the jacket, even has a walk-on part ... Narrated with an appealing blend of wide-eyed curiosity and no-bullshit scepticism, the episodic tale charts the 20s and 30s of a Dublin philosophy graduate, Rob (naturally), whose wanderlust stems partly from his fear that he won’t be able to pen a magnum opus in his childhood bedroom, although Ireland’s 2006 ban on the sale and possession of magic mushrooms has something to do with it too.The itinerant structure keeps things fresh, serving up increasingly wild scenarios ... There’s enough wriggle room to ensure we don’t get hung up on, say, whether Doyle really has pissed in a stranger’s mouth at a Berlin nightclub. But troubling our pieties is part of the point, in any case...
Read Full Review >>
See All Reviews >>
SIMILAR BOOKS
Fiction

Metropolis
B. A. Shapiro
Mixed
What did you think of Threshold?
© LitHub | Privacy