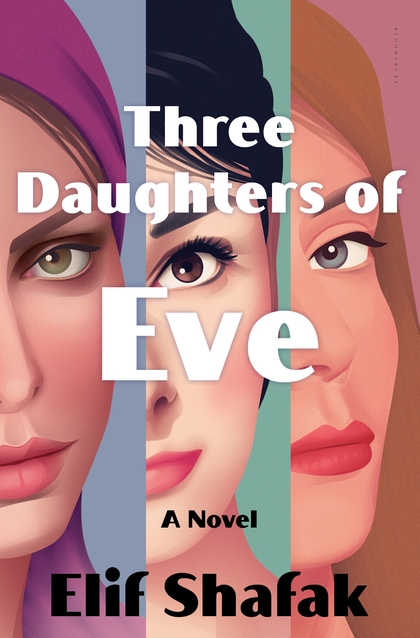 From the author of The Bastard of Istanbul, a novel in which the mugging and attempted assault of a wealthy Turkish woman on her way to an upper-crust dinner party causes her to think back over a close friendship with two other young Muslim women, and their relationship to a charismatic professor, at Oxford University fifteen years previous.

What The Reviewers Say
Rave Ron Charles,
The Washington Post
Elif Shafak’s new novel reveals such a timely confluence of today’s issues that it seems almost clairvoyant. Sexual harassment, Islamist terrorism, the rising tension between the faithful and the secular, and the gaping chasm between the rich and the poor — all play out in the pages of Three Daughters of Eve ... an ingenious act of compression that works several decades into a single evening ... the story that develops keeps circling around that struggle, moving from her parents’ domestic squabbles to the central conundrum of theodicy: the challenge of reconciling an all-good, all-powerful God with an often-evil and chaotic world. Peri is such a fascinating heroine because she remains intensely engaged in this debate but resolutely disinterested ... in the process, Shafak explores the precarious state of Turkish politics, the evolving position of women in Islam, the sexual ambiguities of college life, and the most profound questions of faith. There are novels you want to cherish in the sanctity of your own adoration, and then there are novels you feel impatient to talk about with others. Press Three Daughters of Eve on a friend or your book club for a great conversation about this flammable era we live in now.
Read Full Review >>
Positive Natasha Walter,
The Guardian
There are Shafak’s trademark touches of magical realism in this book, too, as Peri experiences intermittent visions of a baby in a mist, who brings her into contact with a spiritual world that can be both comforting and unsettling. While continuing to explore spiritual themes, Shafak has become more adept at grounding her work in the real world. While continuing to explore spiritual themes, Shafak has become more adept at grounding her work in the real world. She is skilled at capturing the constraints as well as the pleasures of femininity ... The whole novel is marvellously rich in intention. Why, then, does it sometimes falter in execution? ... Shafak’s language shows no shortage of aplomb, sometimes it drifts into cliche ... Despite such caveats, as this complex heroine moves from Istanbul to Oxford and back again, as she jumps from surreal visions into inevitable compromise with real life, as she moves from compliance towards anger and finally understanding, there is an unflagging energy to her story. Perhaps because there is so much at stake for her that might be at stake for the reader, too, her dilemmas and desires seem to persist even after the novel is ended.
Read Full Review >>
Mixed Arifa Akbar,
The Financial Times
Shafak presents so many of the current, clashing arguments on the place of women in Islam through their long, heated debates that she also runs the risk of turning these characters into vehicles for thought rather than living, breathing people ... Shafak excels at satirising contemporary Istanbul’s spoilt, self-satisfied bourgeoisie. The tone of these chapters is blackly comic and highly entertaining ... Yet Azur’s charisma eludes the reader and he seems like a cardboard cut-out of the controversial genius ... Both narratives eventually take on their own urgencies but too much happens too late ... Despite these dissonances, Three Daughters of Eve is an intelligent, fierce and beguiling read that makes complicated theological questions readable and relevant.
Read Full Review >>
See All Reviews >>
SIMILAR BOOKS
Fiction

Better Luck Next Time
Julia Claiborne Johnson
Rave
What did you think of Three Daughters of Eve?
© LitHub | Privacy