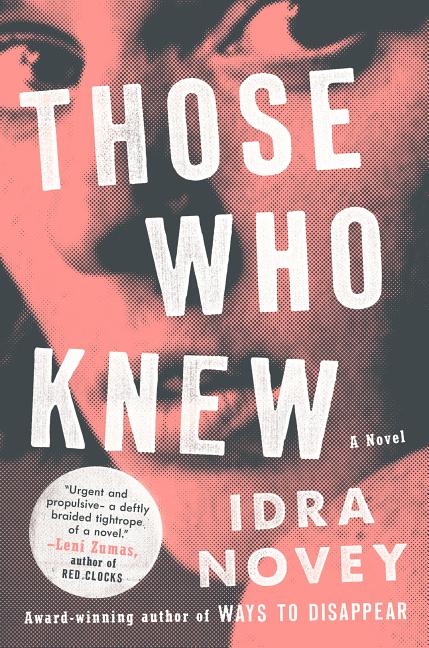 From the acclaimed author of Ways to Disappear, a new novel about what a powerful politician thinks he can get away with and the group of misfits who finally bring him down.

What The Reviewers Say
Rave Ilana Masad,
The Washington Post
Coming out the day of the midterm elections and soon after our newest Supreme Court justice was accused of assaulting several women — and then got confirmed anyway — the novel’s obsession with silence, its damnation of false liberalism, and the fine line it draws between complicity and trauma feel eerily prescient ... Somehow, though the book is slim, we know these characters and their desires intimately by the end ... Novey — a poet and translator as well as a novelist — is a skillful wordsmith with descriptions that are poetic yet never overwrought ... Those Who Knew is not only an important book about silence and its consequences, but also a sheer pleasure to read.
Read Full Review >>
Rave Laura Collins-Hughes,
The Boston Globe
A destabilizing, almost hallucinatory unreality wisps through Idra Novey’s Those Who Knew, a gripping, astute, and deeply humane political thriller. Yet it’s less about the powerful than about the people they hurt, and those who might stop them if they could muster the courage ... Novey has found a felicitous form for this novel, which is the literary equivalent of a film constructed from short cuts. There are only a few moments—a page or three—told from any given perspective before it shifts. This keeps the pace fast and momentum strong, even as each shard of the story invites savoring ... Glancing backward at history and forward at legacy, this is a novel about what happens when good people witness evil and say nothing. But it’s a hopeful novel, too. So they’re going to have to bravely make some noise.
Read Full Review >>
Mixed Helene Stapinski,
The New York Times Book Review
The novel’s political intrigue and corruption, and the sadness that accompanies the sense of helplessness in the face of a great evil, is prescient ... we feel the tired futility in [Novey's] bones—and ours ... There are beautifully bright details...that keep us hungry for more, turning the pages toward some sort of resolution. But the villain’s comeuppance seems like an afterthought rather than the cathartic moment it should be. And a last-minute attempt at an optimistic future seems tacked on as well ... Novey seems older, tired and slightly hopeless. But, then, aren’t we all?
Read Full Review >>
See All Reviews >>
SIMILAR BOOKS
Literary

Please See Us
Caitlin Mullen
Rave
What did you think of Those Who Knew?
© LitHub | Privacy