Those Who Forget: My Family's Story in Nazi Europe - A Memoir, a History, a Warning 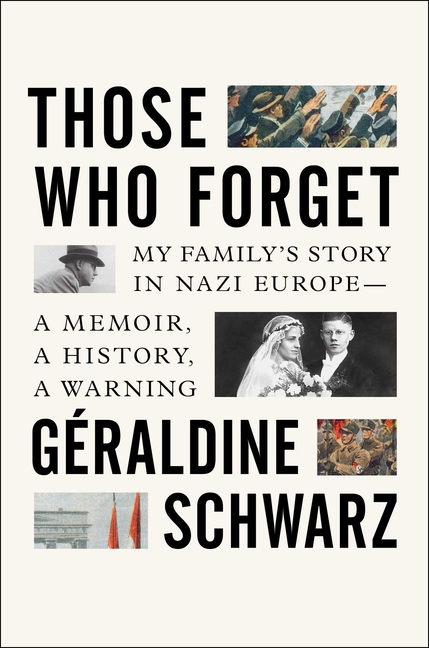 Published to international awards and acclaim, this is journalist Gâeraldine Schwarz's account of her German and French grandparents' lives during World War II, an in-depth history of Europe's post-war reckoning with fascism, and an urgent appeal to remember as a defense against today's rise of far-right nationalism.

What The Reviewers Say
Rave Samantha Power,
The Washington Post
... immensely powerful ... It succeeds brilliantly ... Schwarz, a journalist born to a German father and French mother, makes two powerful, interwoven arguments. First, history is too often reduced to the story of victims and perpetrators, heroes and villains ... Although she has written a searing book about the past, Schwarz’s work is oriented toward the present and the future (she began writing partly as a reaction to the election of President Trump). And it is her second line of argument that makes the book so timely and necessary. Schwarz contends that when societies don’t grapple with their complicity—acting instead as though the inheritance they possess has been innocently won or that the crimes of the past were orchestrated by a few villainous outliers—they will lack the antibodies to prevent present-day intolerance and targeted violence ... as readable as it is persuasive. Schwarz embeds her appeal to citizens and nations to do memory work in a gripping detective story centered on her own family’s history. She has a gift for finding the single scene or exchange of dialogue that drives home her points ... Schwarz’s book deserves to be read and discussed widely in the United States principally for all it has to teach us about the urgency of confronting the darkest dimensions of our own history.
Read Full Review >>
Rave Diane Cole,
The Wall Street Journal
... [a] riveting exploration of Germany’s post-World War II reckoning with guilt and responsibility ... Ms. Schwarz makes a strong case that without the support of Nazis like her paternal grandparents, 'Germany could not have descended so far into chaos and crime.' She is equally persuasive in her thesis that it is only through the hard work of remembering the past, with equal parts historical accuracy and personal courage, that we can begin to heal from the hurt and residual distrust we lean on to rationalize prejudice and hatred of others. With eloquence and passion she demonstrates that we can never be reminded too often to never forget.
Read Full Review >>
Rave Michael Scott Moore,
Los Angeles Review of Books
... [an] exacting and detailed memoir, a blend of personal and political history ... Ms. Schwarz is short on details about her grandfather, but she describes in vivid detail one of the largest French roundups of Jews, and she notes the antisemitism waiting just under the surface of everyday life ... This fresh translation by Laura Marris into English is overdue, but not because Schwarz’s family saga is so unique: it’s a typical story of opportunism and survival by a bourgeois family in 20th-century Europe, repeated from one end of the continent to another. It’s also a powerful primer in the self-ignorance that allowed so many Europeans to act the way they did when someone offered them the barest excuse. The stories are vital, and Schwarz is a meticulous, eloquent chronicler.
Read Full Review >>
See All Reviews >>
What did you think of Those Who Forget: My Family's Story in Nazi Europe - A Memoir, a History, a Warning?
© LitHub | Privacy