This Chair Rocks: A Manifesto Against Ageism 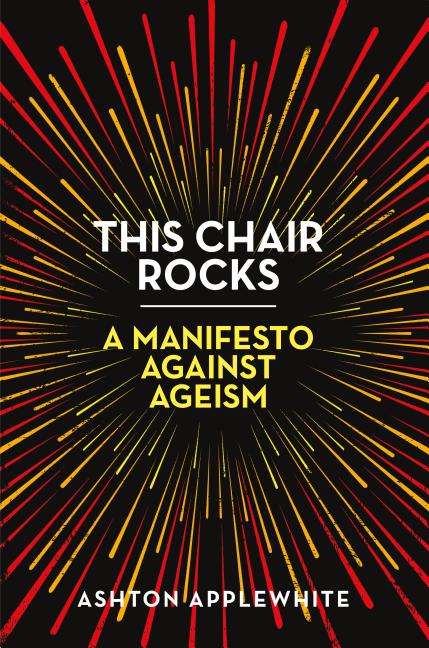 Author, activist, and TED speaker Ashton Applewhite has written a manifesto calling for an end to discrimination and prejudice on the basis of age.

What The Reviewers Say
Rave Margaret Morganroth Gullette,
The Los Angeles Review of Books
... a book we have been waiting for ... Until This Chair Rocks, we haven’t had a single compact book that blows up myths seven to a page like fireworks ... divided into small nourishing sections, like a box of oatmeal cookies ... a pro-aging message, and while these often seem phony, Applewhite’s changes in register, her tart commentary, and her well-chosen stories pique our curiosity, offering us first the unexpected and then the explicable ... The territory the book traverses looks familiar — the brain, the body, sex, work — but I, as a co-worker in the field, still came upon material that was new, and many quotable summations ... a hybrid text — a consciousness-raising document with a personality behind it, and it’s got a winning smile ... With its wit, clarity, and solid information, this readable book, and others that distinguish the field, could give young people a head start before they have absorbed too much of the toxic cultural air.
Read Full Review >>
Rave Pauline Finch,
Book Reporter
Through nine densely packed and brilliantly argued chapters, [Applewhite] unpacks the origins of ageism and how we are conned into self-identifying through numbers alone, debunks myths around cognitive decline, separates the misaligned concepts of youth and health, busts the idea that mandatory retirement is somehow good for the economy, and campaigns for a more intergenerational and interactive culture as a long-overdue normal ... A widely acknowledged expert-activist on ageism and its antidotes, Applewhite brings her combined gifts as author, storyteller, social historian, advocate, influencer and determined disturber to the so-called 'problem' of being old in the 21st century ... She easily could have pulled off a Lone Ranger approach to the subject and delivered a highly credible book. But in mindfully citing a wide diversity of international voices, she has gone far beyond the merely competent to deliver something with potentially huge impact on how we understand every stage of life in healthy communities.
Read Full Review >>
Rave Theresa Muraski,
Library Journal
... entertaining, informative, and thought-provoking ... the author analyzes the relationship among age and identity, self-image, and the physiology of the aging body, skillfully combining personal experience with extensive research to explore the contributions of older workers, the importance of sex and intimacy, and issues related to death and dying ... his enjoyable read provides a positive view of aging that is sorely missing in today's popular culture. Appealing to a wide audience, it might even serve as a spark for positive social change.
Read Full Review >>
See All Reviews >>
What did you think of This Chair Rocks: A Manifesto Against Ageism?
© LitHub | Privacy