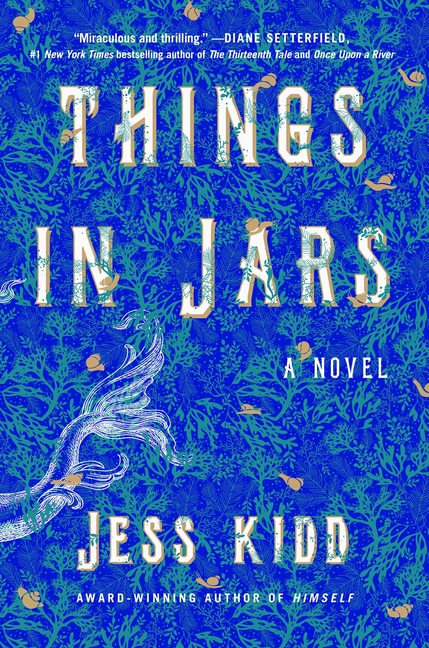 Bridie Devine—female detective extraordinaire—is confronted with the most baffling puzzle yet: the kidnapping of Christabel Berwick, secret daughter of Sir Edmund Athelstan Berwick, and a peculiar child whose reputed supernatural powers have captured the unwanted attention of collectors trading curiosities in this age of discovery.

What The Reviewers Say
Rave Kathleen MacMahon,
The Irish Times (IRE)
If there was an Oscar ceremony for books, then Jess Kidd’s Victorian mystery Things in Jars would surely sweep the board ... Kidd is a writer who’s not afraid of having fun, but that’s not to say that Things in Jars is a frivolous book. For all its humour and colour, and there’s plenty of both, this is a story of serious evil ... Set against such horror – and Kidd does not flinch in serving it up to us – Bridie’s humanity is all the more moving, but it also makes of the novel something timeless, for it’s not just in Victorian England that kindness has the power to prevail over cruelty ... Macabre dealings may be the subject matter of Things in Jars, but tenderness is at the heart of it ... it’s the good that outweighs the bad and, in so doing, reveals Kidd’s range as a writer. Her dialogue is knife-sharp and often very funny. Her descriptions of London are rich and poetic, with pockets of beauty ... For this wonderful portrait of London, for her beautiful writing and even better storytelling, Jess Kidd richly deserves the award of Best Director. And the Oscar for Best Book? Things in Jars, for all the reasons listed above.
Read Full Review >>
Rave Danielle Trussoni,
The New York Times Book Review
... utterly mesmerizing ... Kidd’s imagination — her ability to imagine a world more magical, darker, richer than our own — is a thing of wonder. She rummages through the layers of Victorian society as if through an old steamer trunk, pulling up all variety of treasures, like pythons and heads in hatboxes. It was a relief to leave the present for Kidd’s imaginary past. Such escapism feels necessary right now, a tonic to the toxicity of the story-cycles of our contemporary moment, where information flashes on a screen and disappears, leaving one bereft of the deeply imagined mythologies — the merrows and mermaids of lore — that have, for centuries, sustained us.
Read Full Review >>
Rave Andrew Billen,
The Times (UK)
Kidd gives the world what is instantly one of fiction’s great spectral double acts ... If the novel has any problem at all it is that the debate over whether a human may also be a fish or whether such a specimen must be a fraud cannot long be sustained ... Kidd’s descriptive prose is similarly animated, unusual, alarming ... features a large cast of gargoyles fit for Dickens to applaud, a caddish villain and an intricate plot narrated through two time schemes in, respectively, the present and past tense. It is not a quick read because of the writing’s ornate intricacy, but it is an astonishingly satisfying one. To borrow the novel’s watery leitmotif, it is immersive, and although it would be telling to reveal whether or not Bridie and Ruby get it together, this reader fell deeply for them both.
Read Full Review >>
See All Reviews >>
SIMILAR BOOKS
Fiction

The Ikessar Falcon
K. S. Villoso
Positive
What did you think of Things in Jars?
© LitHub | Privacy