Then We Came to the End 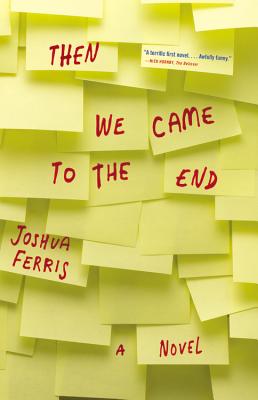 The characters in Then We Came to the End cope with a business downturn in the time-honored way: through gossip, secret romance, elaborate pranks, and increasingly frequent coffee breaks.

What The Reviewers Say
Rave James Poniewozik,
The New York Times Sunday Book Review
Ferris writes the novel in the first-person plural — the snarky, gossipy, anxious employees of the agency compose the collective narrator...The collective voice is fitting for corporate employees, trained to work in teams, their groupthink honed in a million meetings, and the effect is chilling when the layoffs begin and the collective narrator is literally diminished … The major story lines of Then We Came to the End hold few surprises. Like a make-work project, they are an excuse to get through the real joys of the day, which come from Ferris’s small-bore observations. The Pavlovian magnetism of free bagels. The incredible sadness of a hard-boiled egg eaten at one’s desk. And the prophylactic amnesia that separates time on the clock from the set of waking hours we call ‘our lives.’
Read Full Review >>
Positive James P. Othmer,
The Washington Post
As the novel commences in the late 1990s, we're introduced to the workplace by way of a collective recollection of headier times … While the We voice contributes to the book's strangely compelling vibe, it also presents challenges. Occasionally, the narrative suffers from too many anecdotes that begin along the lines of, We heard such and such from so and so who heard it from . . . And in the first sections, the collective We represents such a large, diverse group that it's difficult to feel emotionally vested. But this is only because Ferris does not cheat, and his discipline pays off nicely in the end … Ferris skillfully balances the comic with the authentic, the insightful with the absurd, and we can't help but be transfixed by their stories.
Read Full Review >>
Rave Darcy Cosper,
The Los Angeles Times
Then We Came to the End is full of such brilliant miniature treatises — on the experience of time (‘We had visceral, rich memories of dull, interminable hours’), the hierarchies of complaint, the meaning of lunch — all heartfelt and delivered in solemn deadpan, constituting a veritable poetics of the office. The novel is narrated primarily in the first-person plural — not the noble, empowered We the People, but the we-the-undifferentiated masses … What looks at first glance like a sweet-tempered satire of workplace culture is revealed upon closer inspection to be a very serious novel about, well, America. It may even be, in its own modest way, a great American novel.
Read Full Review >>
See All Reviews >>
SIMILAR BOOKS
Coming Soon

What Could Be Saved
Liese O'Halloran Schwarz
Positive
What did you think of Then We Came to the End?
© LitHub | Privacy