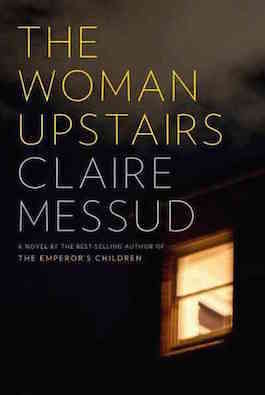 The Woman’s Upstairs is the confession of a woman awakened, transformed and betrayed by a desire for a world beyond her own.

What The Reviewers Say
Rave Daphne Merkin,
Bookforum
It may well be the first truly feminist (in the best, least didactic sense) novel I have read in ages—the novel, candid about sex and the intricacies of female desire, that Virginia Woolf hoped someone would write, given a room and income of her own … The Woman Upstairs is an extraordinary novel, a psychological suspense story of the highest sort that will leave you thinking about its implications for days afterward. Messud’s skills are all on display here, but they seem to be in the service of a more heartfelt and profound tale than those she has previously told.
Read Full Review >>
Rave Liesl Schillinger,
The New York Times Sunday Book Review
It’s exhilarating to encounter such unrestrained vehemence in a work by this controlled, intellectual author. Messud’s previous novels, albeit extraordinarily intelligent and well-crafted, are characterized by rationed or distant emotion. The Woman Upstairs is utterly different — its language urgent, its conflicts outsize and unmooring, its mood incendiary. This psychologically charged story feels like a liberation … In this ingenious, disquieting novel, she has assembled an intricate puzzle of self-belief and self-doubt, showing the peril of seeking your own image in someone else’s distorted mirror — or even, sometimes, in your own.
Read Full Review >>
Pan Emily Witt,
The London Review of Books
Nora’s story begins in the aftermath of an emotional trauma. The experience she is about to recount has done for her: no longer is she the woman with tidy trash and a bright smile … This is a novel that seems to want at every point to demonstrate its plausibility. But the pieces of documentary evidence Messud includes...seem heavy-handed, like a compendium of Google searches … So Nora’s still single, and she never got married and never had kids and has only had three dates in four years. But however hard the novel, in its facticity, strives towards plausibility, it’s what makes Nora happy that seems the most impossible.
Read Full Review >>
See All Reviews >>
SIMILAR BOOKS
Fiction

Mona at Sea
Elizabeth Gonzalez James
Positive
What did you think of The Woman Upstairs?
© LitHub | Privacy