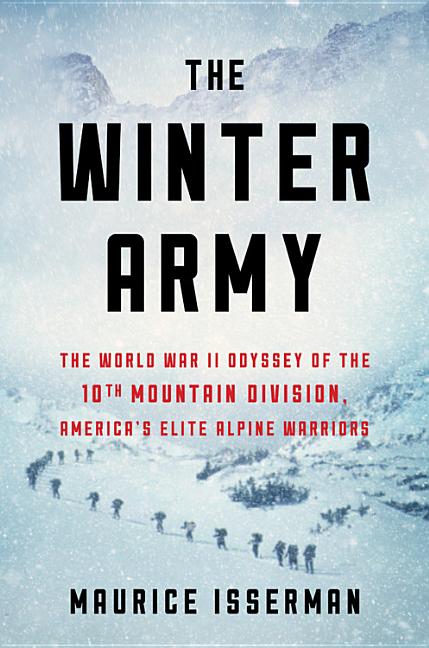 The epic story of the U.S. Army's 10th Mountain Division, whose elite soldiers broke the last line of German defenses in Italy's mountains in 1945, spearheading the Allied advance to the Alps and final victory.

What The Reviewers Say
Positive David M. Shribman,
The Wall Street Journal
... captivating ... It is good to have the stories of these men between hard covers, for their heroics occurred three-quarters of a century ago and are in danger of disappearing ... These figures come alive in these pages.
Read Full Review >>
Positive Curtis Edmonds,
Bookreporter
The best parts of The Winter Army are the chapters about the preparation for war, which sounds odd but isn’t in this context.... Isserman’s history of the division balances nicely between the administrative details of fielding the division, and the hardships and losses that the division faced in battle --- some of them, in his opinion, unnecessary. The Winter Army is a sober, clear-eyed view of what it takes to train, equip and mount a fighting force, and the human cost borne by those brave men in the remote mountains of Italy who always pushed forward ... valuable and telling.
Read Full Review >>
Positive James Pekoll,
Booklist
Isserman has created a fascinating study of this branch of specialized American soldiers during WWII, a bit of military history that will be of interest to WII buffs and readers who have been on the slopes or gazed in wonder at mountains’ majesty.
Read Full Review >>
See All Reviews >>
What did you think of The Winter Army: The World War II Odyssey of the 10th Mountain Division, America's Elite Alpine Warriors?
© LitHub | Privacy