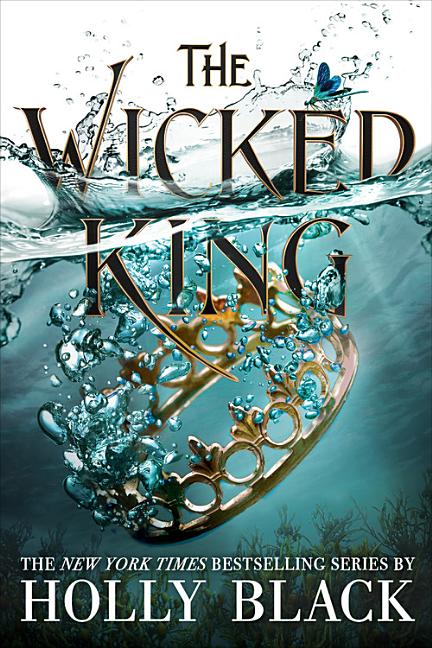 The sequel to Black's The Cruel Prince and second in the Folk of the Air series. As seneschal to High King Cardan, Jude must fight to keep control of the Faerie throne while her younger brother, Oak, enjoys the childhood she never knew.

What The Reviewers Say
Rave Maggie Reagan,
Booklist
This second in a series neatly avoids the second-book slump; readers of the planned trilogy’s first volume will be expecting plot twists, so it’s even more impressive that this manages to stay one step ahead of its readers. Black expands the reaches of her brutally beautiful world and the depths of her deadly, vulnerable characters, and the employ of yet another cliff-hanger ending will leave readers agonized. A sinister, singular thrill.
Read Full Review >>
Positive Brit Mandelo,
Tor.com
The Wicked King plows through the potential for middle book stagnancy with constant high-tension action ... This bundle of conflicts, all maddeningly inter-related and cloaked in layers of deception, keeps the book galloping along without pause ... the relentless pace of the plot also has downsides: the lush, dynamic character development that drove The Cruel Prince is not foregrounded here ... it is an occasional frustration that much of the plot for The Wicked King rests on Jude either failing to communicate dreadfully important information or dismissing warnings/hints that the reader notices without issue. While this device is effective and nail-biting when used sparingly, it begins to feel monotonous if it is the main source of conflict ... Quibbles aside, the strong thematic concerns I adored continue on from the first novel at full strength. Black is careful but frank in her approach to both sexuality and violence in this series ... it maintains a serious investment in the human realities of the trauma it dishes out.
Read Full Review >>
Rave Kimberly Giarratano,
BookPage
Fans of The Cruel Prince have been clamoring for this book, and they will not be disappointed. Black ratchets up the action with even more sinister settings, wicked villains, surprising plot twists and her haunting, melodic prose ... The Wicked King is intense and entertaining storytelling at its finest.
Read Full Review >>
See All Reviews >>
SIMILAR BOOKS
Fantasy

40
Alan Heathcock
Positive
What did you think of The Wicked King?
© LitHub | Privacy