The Weirdest People in the World: How the West Became Psychologically Peculiar and Particularly Prosperous 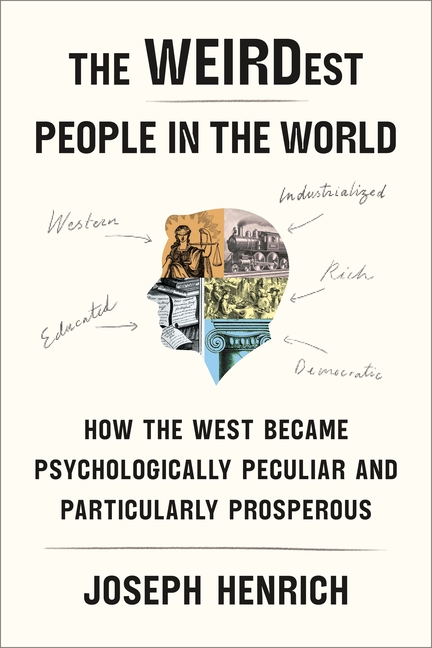 An epic account of how the co-evolution of psychology and culture created the peculiar Western mind that has profoundly shaped the modern world.

What The Reviewers Say
Rave Daniel C. Dennett,
The New York Times Book Review
According to Joseph Henrich, some unknown early church fathers about a thousand years later promulgated the edict: Don’t marry your cousin! Why they did this is also unclear, but if Henrich is right — and he develops a fascinating case brimming with evidence — this prohibition changed the face of the world, by eventually creating societies and people that were WEIRD: Western, educated, industrialized, rich, democratic ... In the argument put forward in this engagingly written, excellently organized and meticulously argued book, this simple rule triggered a cascade of changes, creating states to replace tribes, science to replace lore and law to replace custom. If you are reading this you are very probably WEIRD, and so are almost all of your friends and associates, but we are outliers on many psychological measures ... This is an extraordinarily ambitious book...
Read Full Review >>
Positive Judith Shulevitz,
The Atlantic
...[an] ambitious theory-of-everything book ... Consider this the latest addition to the Big History category, popularized by best sellers such as Jared Diamond’s Guns, Germs, and Steel: The Fates of Human Societies and Yuval Noah Harari’s Sapiens: A Brief History of Humankind. ... If Henrich’s history of Christianity and the West feels rushed and at times derivative—he acknowledges his debt to Max Weber—that’s because he’s in a hurry to explain Western psychology ... Henrich offers a capacious new perspective that could facilitate the necessary work of sorting out what’s irredeemable and what’s invaluable in the singular, impressive, and wildly problematic legacy of Western domination.
Read Full Review >>
Rave Christopher Levenick,
The Wall Street Journal
... fascinating ... an example of 'big history' at its best. It draws on a wide variety of data ...to posit a provocative explanation for major historical developments. It also takes an interdisciplinary approach to its subject, making use of evolutionary studies in culture, religion and psychology. And Mr. Henrich’s writing is admirably clear. It is worth pointing out that his thesis, first advanced in an academic journal two years ago and updated since, is still being vetted by the scientific community. One can’t help thinking that Mr. Henrich will welcome any challenges that may arise from his—surely highly literate—readership.
Read Full Review >>
See All Reviews >>
What did you think of The Weirdest People in the World: How the West Became Psychologically Peculiar and Particularly Prosperous?
© LitHub | Privacy