The Weight of This World 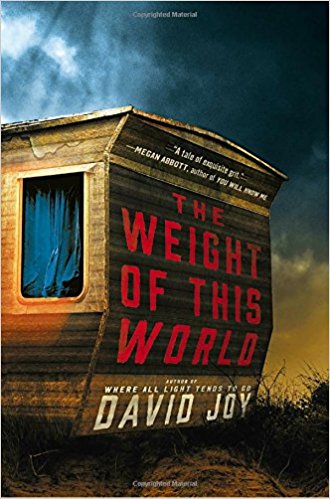 An "Appalachian Noir" focusing on Thad Bloom, a damaged veteran of the war in Afghanistan. Thad returns to a dilapidated trailer in North Carolina to settle down when he and a childhood friend stumble upon a windfall of drugs and cash after witnessing the accidental death of their drug dealer.

What The Reviewers Say
Rave Marilyn Stasio,
The New York Times Book Review
David Joy’s bleakly beautiful tales of the rapacious drug culture of the Appalachian mountain dwellers of Jackson County, N.C., have a dreadful consistency. Every day, it seems, there’s 'another story of another man killing another man in another godforsaken town.' In The Weight of This World, a boy like Aiden McCall knows that 'in time he would become his father' — a man who told his wife he loved her before shooting her in the head and killing himself. That alone should explain why Aiden would choose a brute like Thad Broom for his best friend, remaining loyal even when Thad returns from military service 'malformed and hardened by bitterness and anger.' Their friendship forms the spine of this gorgeously written but pitiless novel about a region blessed by nature but reduced to desolation and despair.
Read Full Review >>
Rave David Cranmer,
Criminal Element
For many admirers of this blunt, unapologetic approach, it’s not just the tight plot with an economical use of words that constitute this style, but characters with a sobering realization that the fix is in—that life deals the majority a crap hand, and the chance of rising above the cesspool is highly doubtful ... Mr. Joy’s primary addendum to the gritty story subcategory (he has cornered the 'Appalachian Noir' market) is realism. Aidens, Thads, and Aprils exist beyond the pages of Mr. Joy’s imagination. Not just the generational poverty of modern Appalachia or overall working-class disillusionment, but the cross-country tremor of drugs that’s undermining whole communities with authorities at a loss to stop it. A snapshot of this authenticity is vividly portrayed in The Weight of This World
Read Full Review >>
Rave Publishers Weekly
Lyrical prose, realistic dialogue, and a story that illuminates the humanity of each character make this a standout.
Read Full Review >>
See All Reviews >>
SIMILAR BOOKS
Fiction

The Devil Takes You Home
Gabino Iglesias
Positive
What did you think of The Weight of This World?
© LitHub | Privacy