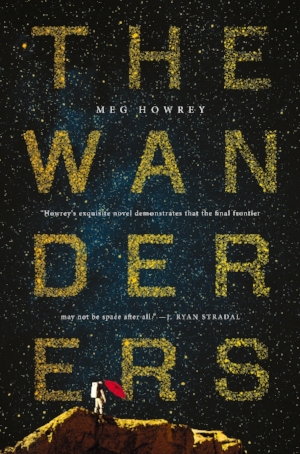 A genre-bending novel set in the very near future in which three astronauts and their families must endure the effects of a training simulation for a pioneering deep-space mission.

What The Reviewers Say
Rave Stephanie Bonjack,
LitReactor
What a wonder. The Wanderers is a meditation on space travel but also on how to be an astronaut. The author pulls the reader into the minds of these professionals so deftly that I felt like I was reading their autobiographies. If I ever wondered what it takes to do this work, I know now ... A final consideration in The Wanderers is the role and motivation of the corporation making it all possible. Prime operates like a Silicon Valley version of NASA, but it doesn't answer to Congress or the electorate; it answers only to its shareholders. Does that compromise in any way the future of space travel and exploration? Would a corporation behave differently than a government agency? For those of us who are enthusiastically watching Elon Musk and his SpaceX progress, perhaps we should ask ourselves this question and ponder the implications it has for the humans who climb inside his rockets and blast away.
Read Full Review >>
Positive Christina Ianzito,
The Houston Chronicle
Is there a point where a simulation - of a Mars mission, of the kind of person we aspire to be - is so realistic that it's as good as the actual thing? Howrey skillfully weaves these questions into an often funny story that grows poignant in its final chapters. We may never plumb the mysteries of outer space; we may never truly understand ourselves or the people we love, she suggests. But there's courage in the attempt.
Read Full Review >>
Rave Zoë Apostolides,
The Financial Times
This, her third and most ambitious novel, takes the astronauts as principal characters but also gives a voice to their children and partners, the satellites who both enrich and encumber their lives. There is a certain loneliness, Howrey suggests, specific to those who have experienced the extraordinary. In space there are no borders, no concept of geopolitics: these man-made lines are invisible from the window of a tiny, spinning craft … Perhaps unusually for a book marketed as science fiction, there are few moments of high drama; Howrey is more interested in the personal history and psychology of each character, in their various and often conflicting motivations, their private grievances and vulnerabilities. Even at its most reflective, however, her use of language is economical, each word carefully chosen and often used to great comic effect.
Read Full Review >>
See All Reviews >>
SIMILAR BOOKS
Fiction

The Deceptions
Jill Bialosky
Positive
What did you think of The Wanderers?
© LitHub | Privacy