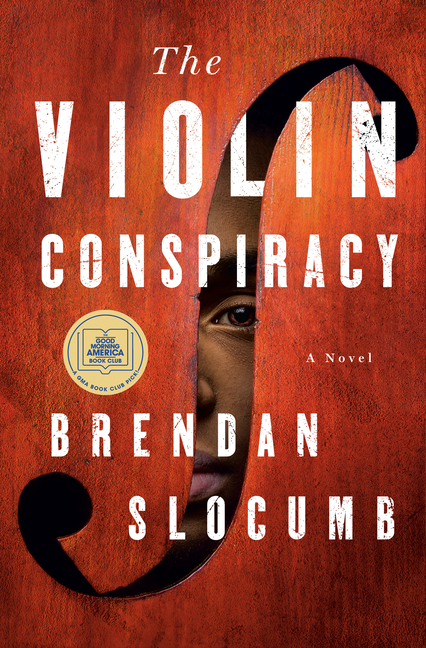 A Black classical musician’s desperate quest to recover his lost violin on the eve of the most prestigious musical competition in the world.

What The Reviewers Say
Rave Victoria Christopher Murray,
The Washington Post
When I opened Brendan Slocumb’s debut novel, The Violin Conspiracy, I was immediately transported to a place I’d never been, surrounded by characters I’d never met. In the crowded world of fiction, that’s no small accomplishment. Taking inspiration from his day job as a music teacher, Slocumb has orchestrated an engaging and suspenseful story about an aspiring musician and his great-great-grandfather’s violin ... so wonderfully written, especially its descriptions of music, that at times I questioned whether I was reading or listening to a concert; the notes in Bach’s Chaconne or Mozart’s Violin Sonata No. 21 in E Minor practically floated up from the pages. Slocumb is equally adept at suspense, whether he’s conveying the ticktock of the main mystery or the heart-pounding, fist-clenching realities Ray has to face as a young Black man in America. This novel, which will keep readers on the edge of their seats until the very last page, is sure to be a favorite in 2022.
Read Full Review >>
Positive Joshua Barone,
The New York Time Book Review
... it’s remarkable that a life like this makes for such a page-turner in Brendan Slocumb’s debut novel, The Violin Conspiracy, a musical bildungsroman cleverly contained within a literary thriller ... The writing isn’t without its lapses...And the central mystery can be solved by anyone who’s seen a Golden Age Hollywood noir ... Yet Slocumb isn’t too different from his protagonist: a natural. He easily conjures the thrill of mastering a tough musical passage and the tinnitus-like torture of everyday racism. There is a lot of work ahead as he writes his second novel, but as a teacher says to Ray, 'Precision and technique can be learned.' After all, that’s just practice.
Read Full Review >>
Rave Samantha Zaboski,
Shelf Awareness
... deeply engrossing ... Brendan Slocumb's part mystery, part coming-of-age novel unfolds layer by complicated layer. The smooth transition to Ray's past effectively introduces a boy whose love for music is instantly infectious. The steps that lead to the discovery of the Stradivarius proceed with suspense and hope, sharing with readers the anxiously excited emotions of a young man enraptured by music, driven to push himself, ready to prove everyone wrong...At the same time, the microaggressions and blatant racism that Ray experiences, both in the past and in the present, illuminate a harsh reality ... Yet through it all, Slocumb imbues Ray with both an admirable patience and an unyielding self-respect, a clear message that it is important--and necessary--to assert one's own worth ... The relationship between Ray and his girlfriend is a fiery addition to the story, and Ray's bumbling charisma a welcome comic relief ... For those who see themselves in Ray, and for those pursuing their passion, his journey is an unmitigated source of inspiration. The multilayered narrative provides insight into one Black man's hard-won success, encouraging compassion for how people of color must surmount additional, unnecessary hurdles. It also takes society to task for discriminatory obstacles that prove insurmountable. Authentic and unexaggerated, this captivating coming-of-age story meets suspenseful crime mystery is a sharp debut.
Read Full Review >>
See All Reviews >>
SIMILAR BOOKS
Coming Soon

Fellowship Point
Alice Elliott Dark
Rave
What did you think of The Violin Conspiracy?
© LitHub | Privacy