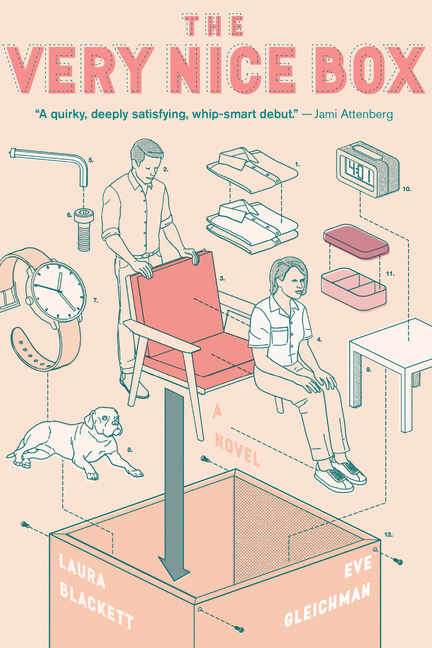 A debut novel that follows an eccentric product engineer who works for a hip furniture company where sweeping corporate change lands her under the purview of a startlingly charismatic boss who seems determined to get close to her at all costs.

What The Reviewers Say
Rave Jillian Medoff,
The New York Times Book Review
... the novel’s authors, Laura Blackett and Eve Gleichman, are linguistic magicians, and their sparkling debut manages to expose the hollowness of well-being jargon while exploring, with tender care and precision, how we dare to move on after unspeakable loss ... While themes in The Very Nice Box are clear-cut — heart versus head, form versus function, creativity versus commerce — their execution is anything but. The crowded action unfolds through comic set pieces, red herrings, character reveals and story reversals that make us reconsider everything we’ve just read. Similarly, the authors meld multiple styles and tones — incisive sendup, murky suspense, sexy rom-com — which, in less capable hands, could have yielded a novel with a Frankenstein vibe. Instead, they’ve constructed a mirrored fun house, one that leads us down different paths, each masterfully tied up at the end, yet reflecting and refracting our own quirky selves ... These days, when so many of us are sapped of focus, reading can feel laborious. But remember the pleasure of soaking up a great novel? Who could you be if you indulged in that memory and let yourself go?
Read Full Review >>
Positive Annie Bostrom,
Booklist
This nicely hard-to-define joint debut combines workplace satire, steamy romance, and genuine suspense. ... Gleichman and Blackett irresistibly and unpredictably entertain with surprising plot twists and lots of diverting scenery in the goings-on at STÄDA and its relatably droll office culture.
Read Full Review >>
Positive Angela Haupt,
The Washington Post
... a very funny debut — and perhaps the most original office satire of the year ... A tense anticipation hums over much of the novel, foreshadowing a big reveal about Mat’s true intentions. The satire itself would have been enough to make the book work; the suspense heightens its stakes and makes it something else entirely ... There’s no way to put The Very Nice Box into, well, a box. It’s a parody that feels like an extended inside joke; it’s a thriller, a romance and a quirky coming-of-age saga. Gleichman and Blackett are trying to make a lot of points: about gender disparities in the workplace; about corporate responsibility; about gentrification. About insidious male toxicity and queer representation. That’s enough for several books, and some plotlines feel rushed, or like too much of a stretch ... But the novel’s witticisms and smart takes help it shine, and its empathetic commentary on grief humanizes it. Ava has closed herself off for years, and watching her open back up is satisfying. Plus, who can resist a novel that takes down an entitled man-child in absurdly grand fashion? Very Nice, indeed.
Read Full Review >>
See All Reviews >>
SIMILAR BOOKS
Fiction

The Ancestry of Objects
Tatiana Ryckman
Positive
What did you think of The Very Nice Box?
© LitHub | Privacy