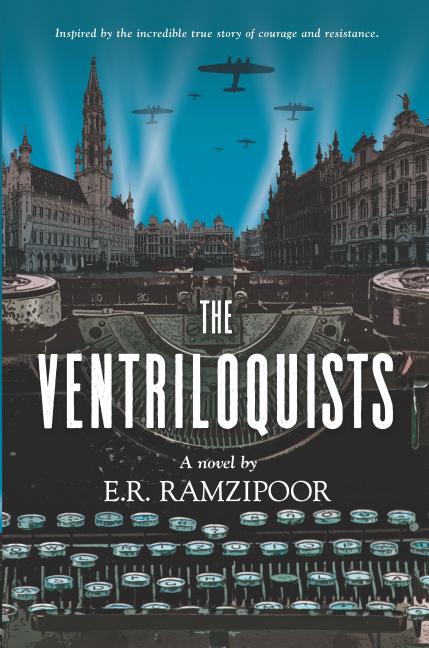 Twelve-year-old street orphan Helene survives by living as a boy and selling copies of Brussels' most popular newspaper, "Le Soir", now turned into Nazi propaganda. Helene’s world changes when she befriends a rogue journalist who draws her into a secret network that publishes dissident underground newspapers.

What The Reviewers Say
Rave Sam Segan,
Lambda Literary
Ramzipoor juggles it deftly, helped by glittering prose, snappy pacing, and a keen sense of humor ... The characters’ wry, sharp dialogue and its sometimes slapstick sensibility owe much to the legacy of Charlie Chaplin and the Marx Brothers. I noticed the book’s sense of humor because it’s at odds with today’s memetic one. It’s very much of the 1940s, and it’s very funny ... themes do not feel forced, but instead feel like a true part of history, a part that is too often elided in fiction ... As for the plot, it’s a rollicking, twisting, turning adventure that’s almost unbelievably complicated, and hangs together on a delicate frame of multiple-point-of-view narration ... the multiple points of view take some time to coalesce. The characters don’t feel distinct until about 150 pages into the 544-page book. But that’s a minor issue, and it’s well worth your time to get past the bumpy beginning ... Rampizoor’s attention to the small details missed by larger tellings of history animate the book, and it’s the light of her perspective that makes it something worth reading, which will stay with you long after you’ve put it down.
Read Full Review >>
Rave Bill Ott,
Booklist
... a compelling historical thriller ... The stories of the six are all fleshed out in such a way that readers will be wanting to hear more about each one of them, and layered over the personal drama is the remarkable saga of how 50,000 copies of a newspaper were published under the thumb of the gestapo. This is a long book, but it is never less than engrossing.
Read Full Review >>
Rave Philip K. Jason,
The Washington Independent Review of Books
... astonishingly original ... The novel explodes with released suspense every few pages as the chapters and their subdivisions shift from character to character, setting to setting, and obstacle to obstacle ... Ramzipoor’s control over the manipulation of time-sensitive information is splendid, and the results are magnetic ... The main narrative, energetic enough, is further enlivened by unexpected subsidiary areas of interest. Perhaps the most thought-provoking and emotionally fraught subplot has to do with the relationship between Lada and a female judge. The thread involving these lesbian lovers and the circumstances that test their various loyalties could launch a fascinating sequel ... In today’s world of propaganda wars, fake news, and alleged fake news, The Ventriloquists holds up a dazzling looking glass for those intent on silencing others and for those who will not be silenced.
Read Full Review >>
See All Reviews >>
SIMILAR BOOKS
Fiction

This Other Eden
Paul Harding
Rave
What did you think of The Ventriloquists?
© LitHub | Privacy