The Unwanted: Stories of the Syrian Refugees 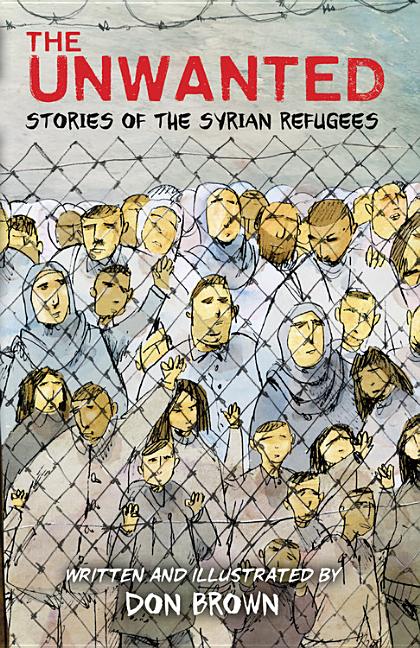 Alongside drawings, graphic novelist Don Brown tells the stories of the survivors of the ongoing Syrian refugee crisis, depicting moments of both heartbreaking horror and hope as Syrians move from their homes through a global landscape that sometimes welcomes but more often shuns them.

What The Reviewers Say
Rave Terry Hong,
Shelf Awareness
Using a similar format that won him awards for Drowned City, Brown presents a graphic hybrid of history and facts—explained in text boxes—with scenes of personal experiences. Beyond numbing data, Brown gives faces and voices to the refugees, as he chronicles various journeys out ... Brown's panels can't—won't?—contain all that the Syrians must endure, as weapons, explosions, fleeing crowds, suffering victims repeatedly break through panel outlines. Yet amid the struggles, Brown won't abandon hope ... In urgently humanizing The Unwanted, Brown's sobering explication and tenacious advocacy prove both necessary and revelatory.
Read Full Review >>
Positive Molly Crabapple,
The New York Review of Books
It is a straightforward story filled with maps and statistics, generous with the sorts of definitions American audiences still need after decades of meddling in the Middle East ... his discussion of the war’s origins are pages well spent ... To those familiar with the Syrian war, this may seem simplistic, but without knowing this background, how can a reader understand why Syrians continue to flee? Brown draws simply, laying digital washes over his sketchy charcoal line. At his best, he verges on the stark simplicity that comics can do so well ... Brown tells Syrian stories without names or identifying details. Sometimes this works ... Other times, this anonymity is less successful ... Brown is at his most damning when he describes how the world turned against Syrian refugees.
Read Full Review >>
Positive Hilary Chute,
The New York Times Book Review
A book for young adults ... weave[s] together short vignettes (all sourced in its conclusion) in a spare style as a way of presenting a wide collectivity of voices. It may be most successful, though, in its ominous wordless panels—such as those of overloaded boats tipping bodies into the silent, uncaring ocean.
Read Full Review >>
See All Reviews >>
What did you think of The Unwanted: Stories of the Syrian Refugees?
© LitHub | Privacy