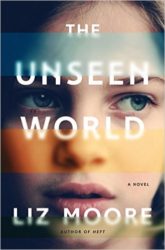 Ada Sibelius is raised by David, her brilliant, eccentric, socially inept single father, who directs a computer science lab in 1980s-era Boston. The lab begins to gain acclaim at the same time that David’s mysterious history comes into question. When his mind begins to falter, leaving Ada virtually an orphan, she is taken in by one of David’s colleagues. Soon she embarks on a mission to uncover her father’s secrets.

What The Reviewers Say
Rave Karen Campbell,
The Boston Globe
Liz Moore’s captivating new page-turner, The Unseen World, is a wry, gentle coming-of-age story and an intriguing glimpse into the development of artificial intelligence and virtual reality, both early on and as envisioned for the future. It is also an incisive, insightful, and compassionate examination of the complexities of family and identity ... powerfully touching yet provocative, challenging us to reconsider our relationship to technology and the digital devices that both distance and connect us to one another.
Read Full Review >>
Rave Hannah Wise,
The Dallas Morning News
The story moves back and forth through the decades seamlessly. As Ada grows, the mystery around David's life grows with her, until it creates a towering impasse over her and the reader ... Moore does not go so far as to actively examine the longevity of digital memorials, but Ada's concern over whether her father's final message to her will have survived 30 years is enough to get the reader thinking about how their own legacies will be preserved.
Read Full Review >>
Positive Susan Coll,
The Washington Post
Set in the 1980s in the pre-Internet days of the emergence of artificial intelligence, this is a novel that artfully straddles genres. It is a rich and convincing period piece ... But The Unseen World is also a cerebral, page-turning thriller, a novel about code that is itself written in a kind of code ... There is, however, sometimes an overabundance of detail that threatens the otherwise sharp narrative...But these are minor complaints in what is otherwise an elegant and ethereal novel.
Read Full Review >>
See All Reviews >>
SIMILAR BOOKS
Fiction

Milk Fed
Melissa Broder
Rave
What did you think of The Unseen World?
© LitHub | Privacy