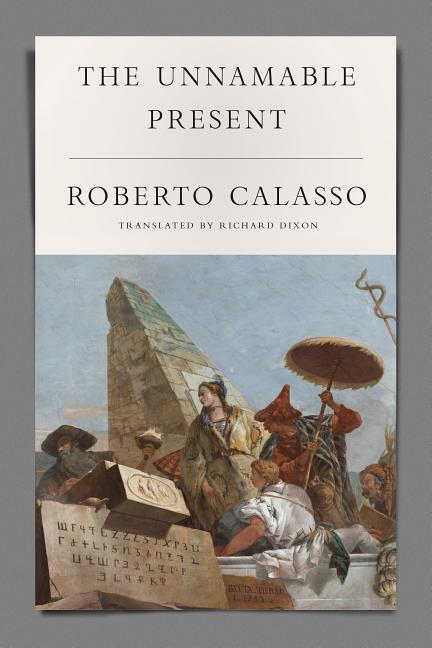 The ninth part of Roberto Calasso’s work in progress, The Unnamable Present is a meditation on the obscure and ubiquitous process of transformation happening today in all societies, which makes so many previous names either inadequate or misleading or a parody of what they used to mean.

What The Reviewers Say
Rave John Banville,
The New York Review of Books
Calasso is keenly aware of the all-too-namable ills afflicting the contemporary world. His new book differs markedly from its predecessors not only in its brevity but in the urgency with which it addresses the burning issues—the raging inferno—of our time. Calasso is a scholar but not an academic, and as such is free to consider a dizzyingly wide range of topics, each leading on to and as often as not blending into the next ... Somehow, amazingly, it all hangs together ... One of the many pleasures of reading Calasso is to follow the bumper-car ride of his thinking, as he caroms off this and that totemic figure dotted about the intellectual fairground. Sometimes this can seem no more than supercharged name-dropping...Yet these names have voices.
Read Full Review >>
Positive Dominic Green,
The Wall Street Journal
Like its predecessors, The Unnamable Present...is aphoristic in exposition, allusive in interpretation and uncompromising in erudition ... Mr. Calasso is not a lecturer or a literalist. He does not write straightforwardly, but shuffles between ideas and episodes, treating all thought as contemporaneous. He handles the events of the past with the reverence of a priest, rather than the dispassion of a historian. Material facts are the tangible aspect of hidden truths ... In Mr. Calasso’s cosmology of ritual and repetition, even those who remember the past are doomed to repeat it.
Read Full Review >>
Positive Arthur Willemse,
World Literature Today
Calasso is an erudite of nineteenth-century proportions. His references are innumerable, and that is why, in selecting one as decisive, nothing is given away ... In The Unnamable Present, Calasso faces up to a world that has done away with his very element—the culture of analogy—as it has irrevocably committed to a digital, virtual reality. This book could very well record an analogist’s final guidance and implorations to that world.
Read Full Review >>
See All Reviews >>
What did you think of The Unnamable Present?
© LitHub | Privacy