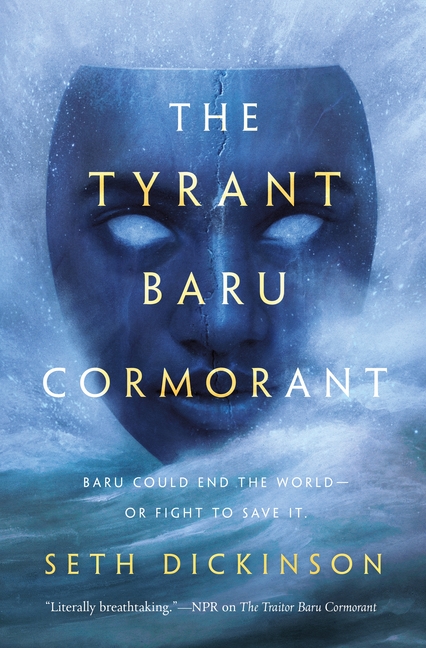 After fifteen years of lies and sacrifice, Baru Cormorant has the power to destroy the Imperial Republic of Falcrest that she pretends to serve. The secret society called the Cancrioth is real, and Baru is among them. But the Cancrioth's weapon cannot distinguish the guilty from the innocent.

What The Reviewers Say
Rave Em Nordling,
Tor.com
... if you are (understandably) avoiding reality during this historical moment of Summer 2020, tread carefully around Tyrant ... readers are kept on the edge of their seats for all 650 pages of this hulking novel ... The structure of the novel just adds to the mounting tension ... With characters set on such narrow paths, with such limited definitions of success, you as a reader are constantly aware that a single grain of sand could destroy the machinations of their plans. It’s incredibly thrilling. Since each plotline unfolds over the course of the long novel, though, revelations are made slowly, making the pacing overall feel slow and bulky in spite of the huge incentives to keep reading. Still, I wouldn’t trade this structure for the world, for how affective it is and how well it ties into the themes of choice and historical inevitability ... a compelling, horrifying, and at times bizarre entry in the Masquerade series—as brutal as its predecessors but with, finally, a scattering of hope. It is a culmination of the previous two books, not so much tying up loose ends but making the threads visible in the first place. The pieces of the story I’m left unsure of are successes, rather than failures of the series. If we don’t doubt someone with 'tyrant' as their prefix in the title, we may well be doing something wrong as readers.
Read Full Review >>
Rave Don Vicha,
Booklist
Not since Stephen R. Donaldson’s Chronicles of Thomas Covenant series has there been such a magnificent antihero surrounded by larger-than-life comrades and opponents. They run an excruciating and complex gauntlet of adventures and soul-searching that will leave the reader emotionally drained at its conclusion, which nevertheless leaves room for continuing intrigues and explorations.
Read Full Review >>
Positive Paul Di Filippo,
Locus
While stuffed and overstuffed with vivid set pieces, sharp character interactions and revelations of different venues, this installment does suffer a little from the mid-series holding action pattern of all trilogies ... moves rather more linearly and stepwise towards a truly fine and resonant and surprising climax, one which, not to give too much away, revolves around, of all anti-swashbuckling maneuvers, a stock-market scheme. Thus does Dickinson remain true to the first book’s original presentation of Baru as Stealth Accountant ... Dickinson can construct a five-page fight scene that never falters, and then turn around and describe that emotionally charged parental reunion with some tenderness ... This alternation of these separate eras provides a pleasant jigsaw-puzzle nature to the plot, and of course, Dickinson’s prose is always cinematically lush, replete with striking figures of speech.
Read Full Review >>
See All Reviews >>
SIMILAR BOOKS
Fantasy

The Last Watch
J S Dewes
Positive
What did you think of The Tyrant Baru Cormorant?
© LitHub | Privacy