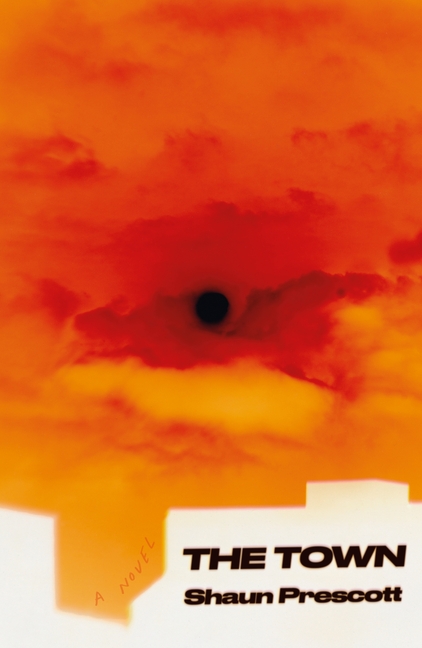 In an unnamed, dead-end town in the heart of the outback, a young writer arrives to research small settlements that have vanished into oblivion. The townsfolk have collective amnesia and show an aggressive distrust towards outsiders. The town is in decline, but the writer didn't expect it to be literally disappearing before his eyes: an epidemic of mysterious holes is threatening the town's very existence, plunging him into an abyss of weirdness from which he may never return.

What The Reviewers Say
Rave Ian J. Battaglia,
The Chicago Review of Books
...meta from the start ... Instead of rendering a place in its entirety, Prescott’s The Town is an evocation of an atmosphere, of a barely perceptible dread that hangs over his characters, suffuses out of the pages and into the reader, and suggests some things may lie forever beyond grasp ... Prescott isn’t able to rely on a driving sense of narrative to propel the stories we hear from the residents forward ... The Town is deeply affecting, and haunting in a way that few books can achieve. Stylistically and thematically, the novel works in a way similar to our own memory, blurring the lines between exposition and implication ... The Town is a somber prose poem of a novel. While it lacks a guiding narrative through line...it makes up for it with a powerful and haunting mood.
Read Full Review >>
Positive James Lasdun,
The Guardian (UK)
The sense of some deeply melancholic encounter haunts the pages of Australian writer Shaun Prescott’s winningly glum debut novel, aided by elegiac musings on belonging and estrangement, growth and decay, places and voids, portals and dead-ends ... A gentle, deadpan comedy of listlessness prevails. Everything partakes in it ... Occasionally someone tries to leave, and it’s here that the book’s absurdist DNA starts to reveal itself ... These tropes may not be entirely original, but they’re executed with a mixture of conviction and laconic humour that gives them a fresh appeal ... Do these ideas catch fire, dramatically, in the way the best speculative fiction does? Perhaps not quite – the human element is a little thin, even allowing for the fact that the book is partly a portrayal of societal enfeeblement. But it’s an engaging, provoking novel nevertheless, intelligently alive to its own metaphorical possibilities, and leaving behind a powerful vision of the world ending, not with a bang, but a whimper.
Read Full Review >>
Positive Jake Ravas,
ZYZZYVA
...while the town feels somewhat out of its time...the novel’s town vs. city divide also speaks to our current era. Xenophobia and economic rage are two potent forces in the air right now and their influence is not by any stretch of the imagination confined to the United States ... Also very 2020 and hovering over the novel is an apocalyptic foreboding ... The Town is an impressive debut; perhaps most so for how Prescott maintains its singular and beguiling mood for the entirety of the novel—part comic satire, part existential horror. Prescott effectively conveys the sense that history and art seem incapable of reflecting the calamity of our present moment. There is only one question that continues to haunt both the narrator and the town’s residents, one that perhaps speaks to the Western world at large: is it that we are disappearing or are we, in the most meaningful sense of the word, already gone?
Read Full Review >>
See All Reviews >>
SIMILAR BOOKS
Fiction

The House of Fortune
Jessie Burton
Mixed
What did you think of The Town?
© LitHub | Privacy